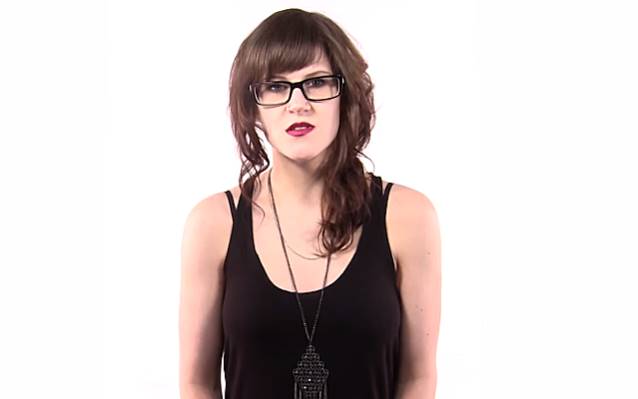 "The status of KITTIE is kind of complicated," Morgan began. "The last full tour that we did was summer of 2012. However, we did do one show last year in Toronto. Right now we're sort of… I don't want to say we're on hiatus, because we technically are still talking about things, working on things, thinking about potential shows, ideas for the future. I guess, to put it plainly, it came to a point where doing the band full-time became too much financially, especially touring in the States. There just isn't enough demand or money for us to support ourselves fully with the band. We haven't broken up or anything like that. It's just we decided that focusing on other career choices were equally as important at this time."

Asked where she is working these days, Morgan said: "I work at the head office at (a chain of fitness clubs). I'm in marketing, which is cool. (It's) a place where you can move up in the world, and I certainly have marketing and PR experience, so that's where I have my eyes focused. I'm not, like, telling people to do push-ups and stuff in the clubs. [laughs]

"It's fine by me. I feel like I can apply a lot of the experience that I've had in dealing with people and booking shows and doing our own managing for the last few years.

"We all have jobs or whatever, and to me it's not that big of a deal. I feel bad for my sister [Mercedes Lander, drums], because she went and got her real estate license and metal web sites were like writing articles about her like, 'Oh, this is so funny.' It's not funny. Everyone has a fucking job. Just because you have to go and find other sources (of income), does that make you a failure? Absolutely not."

She continued: "We made a conscious decision. We understand that nothing is going to last forever, and while we do obviously have a wildly loyal fan base — the Indiegogo campaign is a reflection of that — the way that things are, we're not making enough money. Even if we toured nine months out of the year, it's not enough to pay our bills. Even having to do things like pay for accountants and lawyers and that sort of thing. It just started to become overwhelming, and it's like it's time to try to make some money other ways, so that maybe we can continue with the band and put that money we've made into it."

KITTIE recently raised $40,000 via a crowd funding campaign for a 20th-anniversary documentary. In addition to paying for the production costs of the 20th-anniversary documentary DVD, the Indiegogo campaign will help fund a tell-all book that "digs deep to give [the fans] the story behind the music." KITTIE is working on the official band biography with Mark Eglinton, an author, journalist and film-producer currently based in Edinburgh, Scotland who co-authored former PANTERA/DOWN and current KILL DEVIL HILL bassist Rex Brown's memoir, "Official Truth, 101 Proof: The Inside Story Of Pantera", and whose first book, titled "James Hetfield: The Wolf At Metallica's Door", was published in April 2010.

"I've Failed You" was released on August 30, 2011 via eOne Music. The CD was recorded at Beach Road Studios in Goderich, Ontario, Canada. The band once again worked with producer Siegfried "Siggy" Meier, who helmed "In The Black".