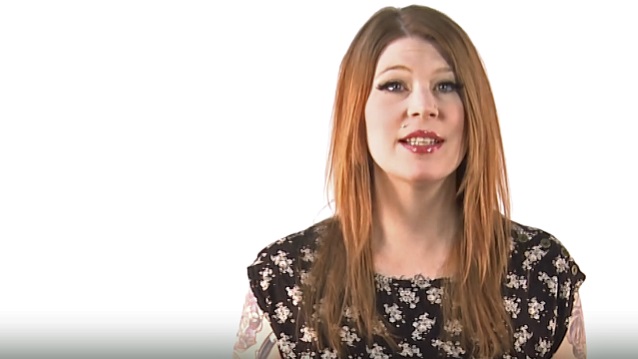 KITTIE drummer Mercedes Lander was interviewed by Diane Webb of YesterdazeNews during January's NAMM convention in Anaheim, California. The full conversation can be streamed below. A few excerpts follow (as transcribed by BLABBERMOUTH.NET):

On "Origins/Evolutions", the forthcoming documentary about the band:

Mercedes: "We kind of decided that, for the twentieth anniversary, we wanted to give something back to the fans, for — obviously — sticking by us for so long. We have the best fans in the world, so we wanted to really make sure that they got to have a little peek inside of what it was actually like to be in the band, because we have never really released anything like this. We just wanted to pay homage to the people that made us who we are, so we started working with Rob McCallum, who is a documentary filmmaker actually from London [Ontario], which is hilarious, so we're working with a hometown boy. We found all of our archival footage; switched it over to digital, which took forever; and then started shooting interviews. It just kind of exploded from there. It's like the untold story — the portion of the band that not a lot of people got to see."

On starting to tour at such a young age:

Mercedes: "It was weird. I had the weirdest childhood ever. I don't really know anybody else that grew up like that. It's definitely surreal, and it puts a lot of things in perspective. Also, it makes social interactions kind of weird, too, because you're sitting around with a bunch of people that aren't in the business, and you all start telling stories. All my stories involve, like, strip clubs and a lot of alcohol and debaucherous things, so 'normies' are kind of weirded out by that. I've definitely had a really weird life and a lot of different experiences, so it's interesting."

On how the climate has changed since the band started out:

Mercedes: "As women in the music industry, we've all experienced not great things, fucked-up shit. Whether it's promoters or other guys in bands — that happens a lot, actually — so it's nice that that is all coming to light now, and the perpetrators are actually now being named, which is nice. I feel like, as females, we really need to remember to stick together. But at the same time, not everybody's bad, but we all do need to stick together and make sure we find that camaraderie between us, and on top of that, start to maybe change the dialogue of how people speak about women in music. I feel like once we stop singling women out in the music business — like, saying 'female-fronted' — once we stop that, that's when real change is going to happen. Once people can look past that, the difference of just the fact that you're a female, I think that real change is going to happen, especially in music. I think journalists in general tend to focus on that a lot — 'female-fronted,' blah blah blah — but that's not what it's about. It's about the music. That's where we've always been. You can read interviews with us back when we were 15 — we'd just say, 'We want to be a band, no strings attached.' That's how we'd like to operate, and how we've operated. I just feel like at this point, singling a band out because they have a female member or they're all-female, it's so '90s. You don't need to do that. You have fucking eyes, and the fact that you're pointing that out, or talking about 'female-fronted,' it's like, why don't you focus more on the music? Why don't you write about the music? You don't talk about DARK FUNERAL's wieners. Nobody talks about that, so why does it matter? It shouldn't matter on the opposite spectrum."

"Origins/Evolutions" will be released on March 30 via Lightyear Entertainment in North America. The three-disc set, which was directed by Rob McCallum, includes a Blu-ray and DVD of the documentary as well as a new live album on CD.

Last October, KITTIE celebrated the "Origins/Evolutions" premiere by bringing together some of its former members for a special concert at Rum Runners in London, Ontario. The event marked the band's first live appearance since the death of KITTIE bassist Trish Doan (a.k.a. Trisha Jai-Mee Doan), who passed away a year ago at the age of 31.