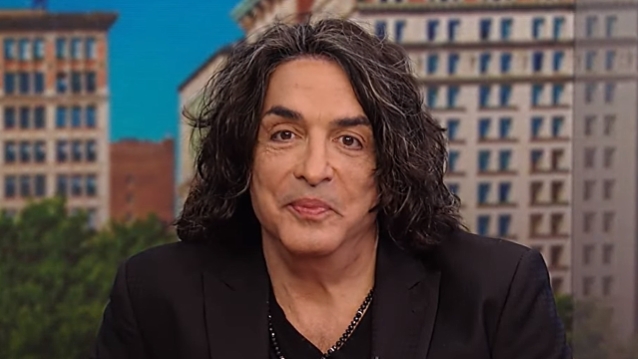 In a brand new interview with Yahoo! Finance, KISS frontman Paul Stanley was asked for his views on music-streaming services like Spotify and Apple Music. He said (see video below): "I think it's still the Wild West, and I think that overall, for the most part, it's unfair to the musicians. Because the musicians, as anybody who's a laborer, should be able to set their fee, and then you either buy it or you don't. The whole way this started with streaming was, basically, 'We'll pay you X, or we won't pay you anything.' So it's as though someone would come in and paint your house and then you would dictate how much they get. The premise of it is wrong. So, whatever it evolves into, it's just founded on something that I find really wrong.

"I don't worry about me — luckily, my rent's paid, and then some — but there are young people who are making music who may be very idealistic now and say money is not the motivation, but when you need to pay the rent, it will be the motivation," he added.

Back in 2016, Stanley spoke to Indiepower TV about how streaming and illegal music downloading has affected artists' ability to survive. He said: "Unfortunately, with the Internet and with social media being what it is, I think that ethics and morality have found their way to the backseat with a generation, perhaps, that somehow believes that music should be free. And that's coming from people who expect to get paid for the job they're doing, which is very ironic. So they wanna be salaried for their job, but they want your music for free. So it's a twisted logic. And I'm sorry to see people have to negotiate with one hand tied behind their back because they don't really have a choice; it's either take what you can get in the market, or get nothing. So it's tough out there. I don't envy anybody starting. And it's all well and good to say, 'I'm only doing this for the love of music,' but when you can't feed yourself or you can't pay the rent, you'll think twice."

He continued: "The size of your success is much more limited than it once was, and the chances of your success are much more limited than they once were. Once again, it's always interesting when somebody who's downloading files, stealing music, or 'sharing' music… That's kind of like sharing somebody's car that they don't know that you took their car out. But, 'We're sharing your car.' So it's just very interesting to be in a position where somebody's saying, 'Well, you're rich enough.' Well, I'll decide when I'm rich enough. So things have become a bit distorted, and hopefully the water will find its level again."

Stanley is promoting his new book, "Backstage Pass", which was released on April 30 via HarperOne, HarperCollins's San Francisco-based unit that specializes in publishing books in religion, spirituality, and personal growth.