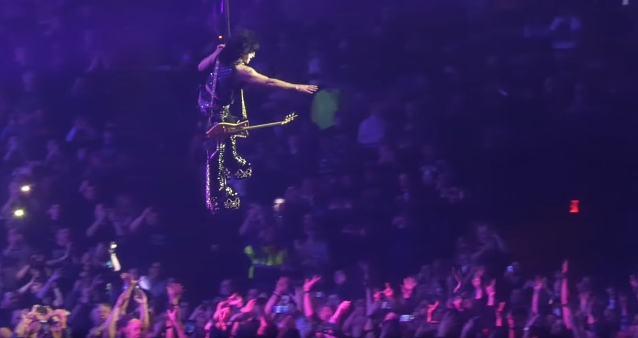 An apparent technical mishap during KISS's concert in Mexico forced Paul Stanley to abandon one of his trademark stunts.

At every show on the band's ongoing "End Of The Road" tour, the guitarist/vocalist has been flying fly along a zip-line above the crowd during "Love Gun".

On Friday (May 3), as KISS performed at the Domination México festival at the Hermanos Rodríguez race track in Iztacalco, Mexico City, the zip-line was apparently positioned incorrectly or it failed to be properly secured, leading Stanley to give up his attempt at being airborne.

Fan-filmed video footage of yesterday's concert shows a roadie assisting Stanley as he struggles to be affixed to the zip-line, only for a frustrated Paul to apparently instruct the man to forgo the entire act.

Earlier this year, Stanley, who has weathered physical abuse through years of touring and multiple surgical repairs to his rotator cuffs and both knees as well as a hip replacement, told the Los Angeles Times that he wasn't a fan of rehearsing the zip-line stunt in an empty arena.

"I'm not really fond of it," he said. "With an audience it has an air of invincibility, and that's exhilarating. To be Superman with a guitar doesn't suck."

KISS's stage production has been designed by Robert Long, who began as Stanley's guitar roadie in the mid-'90s.

Gene Simmons told the Los Angeles Times that KISS "had some problems onstage" at the first show of the "End Of The Road" tour. "The fans didn't know anything," he said. "They just went, 'Wow!'"