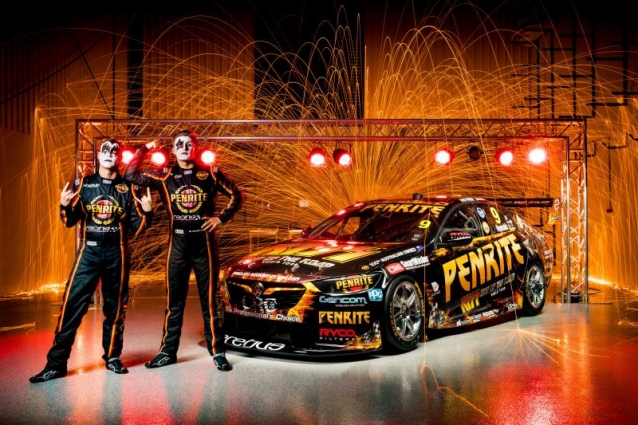 Rock'n'roll legends KISS will run their legendary logo and colors on the Penrite Racing Supercars of David Reynolds and Anton De Pasquale in a world-first partnership to promote their Newcastle show and the band's "End Of The Road" Australian tour in November.

KISS has endorsed a landmark agreement for their globally celebrated KISS logo and imagery to appear on the two Penrite Racing Supercars at the Vodafone Gold Coast 600 and Newcastle 500.

The covers were taken off the one-off colors by the Penrite Racing team in Melbourne, ahead of the Australian leg of the KISS "End Of The Road" world tour.

Reynolds, who donned the iconic KISS makeup as part of the announcement, said it's an honor to have one of the world's biggest ever bands feature on his Supercar.

"KISS is one of the biggest bands in the history of music and I am absolutely stoked to get the chance to race in the famous band colors; it's a huge honor," Reynolds said.

"The band has millions of fans around the world and the famous KISS Army, so this is a real privilege. We will be rocking the colors with pride on the cars and in all our theming. We will also be pumping some of their biggest hits through the radio to fire us up. Fingers crossed we can give KISS fans a double reason to celebrate."

KISS said: "We're thrilled to have joined with the good folk at Penrite Racing to unleash not one, but two KISS supercars. We know how fantastic Supercar racing is in Australia so we're honored to be amongst it."

"We can't wait for everyone to see the first-ever KISS Supercars," Gene Simmons added. "KISS fans get to the track early to cheer them on. But keep your engines running because after the race KISS is going to rock the Newcastle 500. Hope you Love It Loud!"

Penrite corporate partnership manager and director of motorsport Jarrod Harding said: "When the idea to partner with the biggest rock band in the world was first presented, we jumped at the opportunity and moved heaven and hell to make it happen. Obviously, KISS has a massive fan base and are hugely culturally relevant in Australia and New Zealand and their music resonates well with our customer base.

"Being an Australian family-owned and -operated business, we have greater flexibility with our branding guidelines that can accommodate such a departure from our usual corporate look. It also helps that we have a couple of big KISS fans within the Penrite family. We have a number of activations both on and off the track so keep an eye out for the fireworks."

KISS plays its only outdoor show of the upcoming farewell tour at the Newcastle 500 on Saturday November 23. It's also their only regional performance and one of only two shows in New South Wales.

Supported on the night by Newcastle's own SCREAMING JETS, the band's performance at Newcastle's No.1 Sportsground is expected to sell out and bring in thousands of extra visitors to the region. To have the two KISS Supercars racing that day is something KISS fans will not want to miss.

The Coates Hire Newcastle 500 is the season finale of the 2019 Virgin Australia Supercars Championship and will run from 22-24 November on the streets of Newcastle's CBD.

Tickets are still available to the event from Ticketek and special Rock'n'Race tickets are available for fans to gain access to a full day of racing and the concert.

The Coates Hire Newcastle 500 was secured exclusively for Newcastle for five years by the NSW Government via its tourism and major events agency, Destination NSW, in partnership with the Newcastle City Council.

KISS begins its Australian tour on November 16 in Perth.