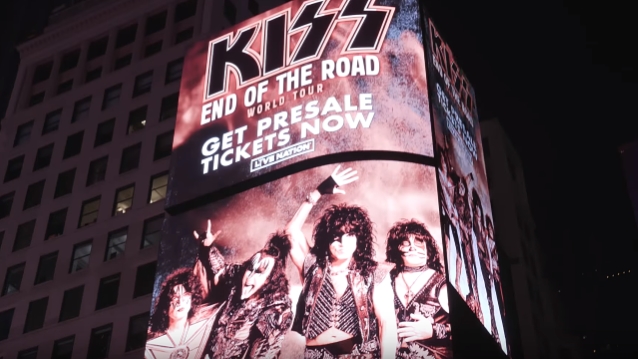 Yesterday, iconic rock band KISS celebrated Halloween with a total rock and roll takeover of Times Square in New York City. The epic move was in celebration of their recent "End Of The Road" world tour announcement — which will be the band's final tour ever.

Video of the massive takeover of four enormous clusters and 13 huge billboards right in the heart of the Big Apple can be seen below.

"We don't do anything small," the band says in the video.

"I was a New York City cab driver. I remember driving through Times Square but never could I have imagined that instead of driving the cab, I'd be up on the billboard," said frontman Paul Stanley.

The initial "End Of The Road" announcement was made a month ago on NBC's "America's Got Talent", and earlier this week, the band revealed the first set of dates and cities in North America, produced by Live Nation. International markets were announced simultaneously.