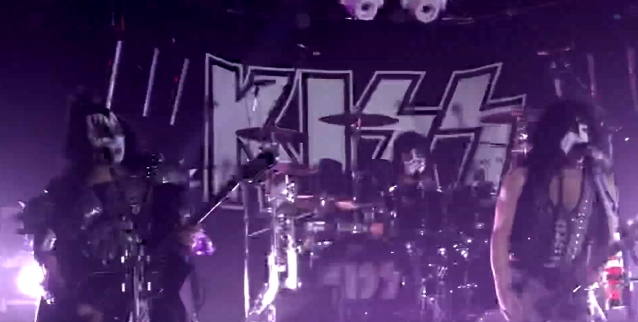 Legendary rock band KISS performed an intimate invitation-only show for SiriusXM subscribers and VIPs on Monday, February 11 at Whisky A Go Go on the Sunset Strip in Los Angeles.

The special concert for SiriusXM featured KISS performing songs from the band's 45-year career. This marked the first time KISS has played a club in over 20 years and was its first performance at the world-famous Whisky a Go Go, the venerable rock club on the Sunset Strip that has played host to rock 'n' roll's most important bands and artists, from THE DOORS, to Janis Joplin, to LED ZEPPELIN, as well as today’s emerging new artists.

KISS's setlist was as follows:

KISS's performance at Whisky a Go Go launched SiriusXM's "The Party Continues", a new live series that will feature music's top artists performing in an intimate venue for SiriusXM subscribers following music's biggest night at the Grammy Awards. "The Party Continues" joins a series of concerts established by SiriusXM at special and iconic venues across the country, including at the Apollo Theater in New York City, The Stephen Talkhouse in the Hamptons, the Faena Theater in Miami Beach and more.

The performance will air on Tuesday, February 12 at 5:00 p.m. ET on KISS Army Radio, channel 30, and through the SiriusXM app on smartphones and other connected devices, as well as online at siriusxm.com. The concert will air on Howard Stern's Howard 101 channel on Friday, February 15 at 9:00 p.m. ET.

That was a show #KISS #KISSArmy

I documented history tonight when Sunset Blvd was shut down in order to capture these photos, then #Kiss rocked the #whiskyagogo for @siriusxm. ? #rocknroll #kissarmy

Kiss tonight at the Whisky. Been looking forward to this one. pic.twitter.com/lE3tV23PaZ