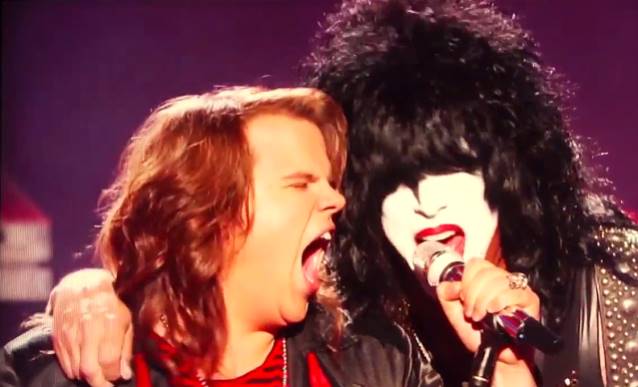 KISS performed with "American Idol" finalist Caleb Johnson earlier tonight (Wednesday, May 21) as he battled it out with Jena Irene on the Season 13 finale of the show. The program also saw Jena hitting the stage with PARAMORE.

The 23-year-old Johnson beat out 17-year-old Irene, who is from the Detroit area, to be named "American Idol" and win a record contract.

In addition to performing with KISS, Johnson sang "Dream On" by AEROSMITH, "Maybe I'm Amazed" by PAUL MCCARTNEY and his single "As Long As You Love Me".

Before the show aired, Johnson spoke with the Asheville Citizen-Times about his performance with KISS. He said: "I rehearsed with KISS last night and they were absolutely amazing. They were so welcoming. I heard that they spent $25,000 worth of pyros for the show and when we rehearsed it, it was literally like the Fourth Of July. It's insane, and I'm going to have a blast."

He continued: "What's so cool is we actually just hung out like in a room for about 45 minutes. They were so incredibly nice and hilarious and I think they actually want to meet my brother and hang out with him. They were seriously some of the nicest people I've ever met. And they were so insightful and just gave me a lot of good feedback. Gene Simmons was, like, 'Hey man, I'm not going to sugarcoat this, but man, you've got the goods.' And I was like, 'Wow, that's an icon of rock and roll.' And it was just crazy."

After learning on last week's show that he was going to be performing with KISS, which is said to be one of his biggest musical influences, Caleb got so excited he jumped into the arms of his "little" brother, who's got several inches on him, according to USA Today.

KISS' latest appearance on "American Idol" was not the first time the band has played on the annual reality show and singing competition. KISS previously performed its classic songs "Detroit Rock City" and "Rock And Roll All Nite" on the 2009 season finale of "American Idol". They were introduced by finalist Adam Lambert, who sang the KISS classic "Beth" prior to the band taking the stage (with Adam joining in).