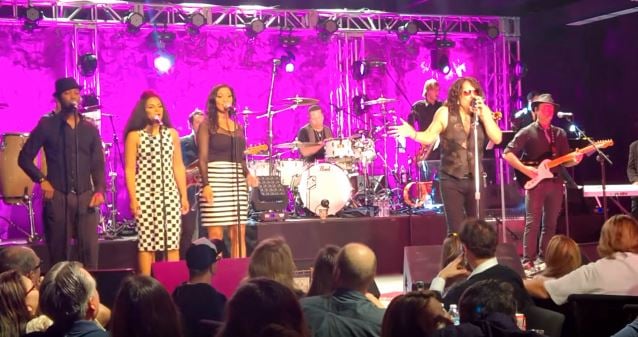 According to The Pulse Of Radio, Paul Stanley has just announced an intimate one-off Los Angeles club date with his R&B revue, SOUL STATION. The KISS frontman and his band are set to play on Saturday, March 11 at Hollywood's Sayers Club. The show marks Stanley's first since canceling four Southern California gigs last month after suffering a concussion while skiing.

Stanley said in the announcement for the club date: "We're living in a time of being fed canned pre-programmed backing tracks and lip syncing in place of the electricity and passion of real live R&B.

"When I was a boy, before I ever saw THE WHO or LED ZEPPELIN, I saw Solomon Burke and Otis Redding. I saw THE TEMPTATIONS and all that music is part of the foundation of the music I've made. SOUL STATION is my chance to celebrate it for a night that's real, live and faithfully recreates the sound with the respect it deserves."

He went on to say: "Whether it's THE STYLISTICS, THE DRAMATICS, THE TEMPTATIONS, Smokey (Robinson) and THE MIRACLES, BLUE MAGIC and on, these songs, arrangements and sound just blow you away.

"I don't play guitar in the band and we don't do a single KISS song. That's not what this is about.

"It's magical to hear those songs played right and we're making magic."

Stanley told The Pulse Of Radio that he always wanted KISS's greatest work to contain everything that he loved and admired about his favorite records growing up. "I'd like to think that the bands that you are influenced and inspired by doesn't necessarily mean that you mimic them," he said. "It means that their passion, or their approach is inspirational. So, whether its gospel, or Motown — it all is music of passion. And that's what I think we wanted to and I wanted to see us channel was the passion and the fervor that all the music I loved had. Y'know, its not about perfection — it's about passion."

KISS next performs on April 21 in Reno, Nevada at Grand Sierra Resort & Casino.