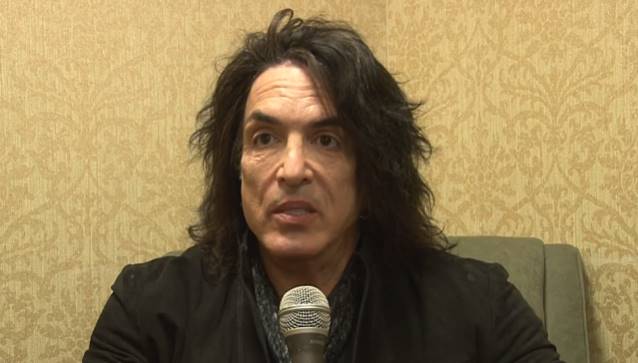 KISS guitarist/vocalist Paul Stanley recently spoke to Forbes.com about how he avoided the pitfalls of success that have led to the departure of the band's original drummer Peter Criss and lead guitarist Ace Frehley.

"It's a pretty safe statement to say that most entertainers have self-worth issues and image issues, inferiority issues," Stanley said. "Let's face it, getting up on a stage or getting up in front of people is not a normal thing to do. You do it because you're seeking approval on a mass scale when you don't get it on a small scale. So if you're not going to address that as you become successful, then the clock is ticking because of all the possible poisons that will enter into your life. Unless you can look elsewhere to remedy whatever the problems are, you're a fatality waiting to happen, if not in terms of your life then certainly in terms of your career."

"Anyone who is pursuing success knows how lonely it can be and that having a support team or people who are blazing the path with you is very reassuring and gives you a shoulder to cry on and a team to celebrate with," he said. "No victories are won by individuals. The key to success is always teamwork."

Stanley also spoke about how he initially believed that his ticket out of his unhappiness, or issues with his growing up, or his birth defect, or his hearing loss, was becoming famous and successful. "The most sobering thing can be for somebody who is unhappy that seeks success as a way to fulfill their insecurities is to find out that it changes nothing," he explained. "What do you do then? You either medicate yourself or you decide to find out what you really need. My story is about finding out what I really needed."

In "Face The Music", Stanley talks frankly about his early struggles with hearing — he was born with Level 3 Microtia and is deaf in his right ear. Microtia is a congenital deformity of the cartilage of the outer ear that can affect normal hearing.

Stanley, who grew up half-deaf and scarred with a deformed right ear, eventually had reconstructive surgery in 1982 to create an ear using a piece of his rib cage. The Pulse Of Radio asked Stanley why he kept his ear a secret for so long. "Oh, it was painful," he said. "It was too painful. Y'know, you can only reveal things and you can only deal with things when you're ready to. And my experiences as a child were so debilitating and destructive, that the best way for me to deal with my ear was to cover it and to — at least on the surface — ignore what was going on; although when something is invisible to others doesn't mean it's not visible and very much a part of your life."

Microtia is a congenital deformity of the cartilage of the outer ear that can affect normal hearing.

There are four grades of Microtia, ranging from a small ear, to a complete absence of the external ear and ear canal.

The lack of ear canal leads to conductive hearing loss. Microtia occurs in every one out of 8,000 to 10,000 births.

It usually occurs on only one side (more commonly on the right side) and this can lead to single-sided deafness.