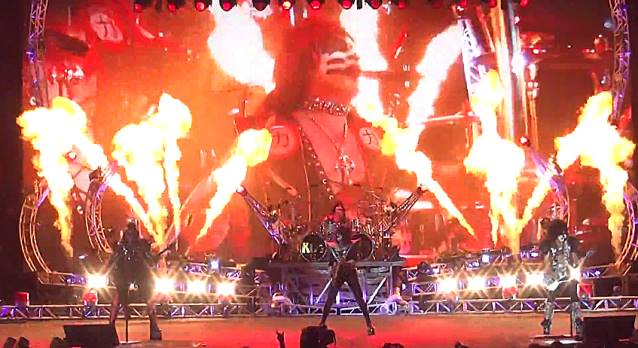 Keith Leroux of KissOnline.com has uploaded video footage of KISS performing the song "King Of The Night Time World" at the opening show of the band's tour with DEF LEPPARD on Monday, June 23 in Salt Lake City, Utah. Check it out below.

KISS and DEF LEPPARD announced their 42-date 2014 summer tour in March during a press conference at the House Of Blues in Los Angeles. The nearly 10-week trek will run through August 31 in Woodlands, TX at the Cynthia Woods Mitchell Pavilion, hitting both major cities and secondary markets. DEF LEPPARD will open each show — although the tour is billed as KISS and LEPPARD co-headlining. KISS frontman Paul Stanley explained that although DEF LEPPARD and KISS have no shared history — they've been equal admirers for decades. "We've run into each other at festivals and, y'know, it just seemed a natural fit," he said.

"At some point it really becomes important to go out there and give everybody bang for buck. Give everybody something more, perhaps, than other bands are.

"We have history of going out there and trying to do the greatest shows possible.

"Summer is a great time to go out, enjoy yourself, you can go out with your family, just go out on a date — but in any case, you want full night. And you're not going to hear more better songs than with the two of us. I wanna just hang around and listen to these guys."

Gene Simmons — along with Joe Elliott and Paul Stanley — explained that this tour was created with the band's fans in mind. "Anybody that thinks this is just about ego — yeah, we love each other and all kind of stuff; this is for the fans, of the fans, by the fans — we are fans of DEF LEPPARD," he said. "And we hope the fans are going to get the most out of this, and that's what it's all about." Elliott added: "Hallelujah!" Stanley said: "So, it's by the fans -- buy the tickets."