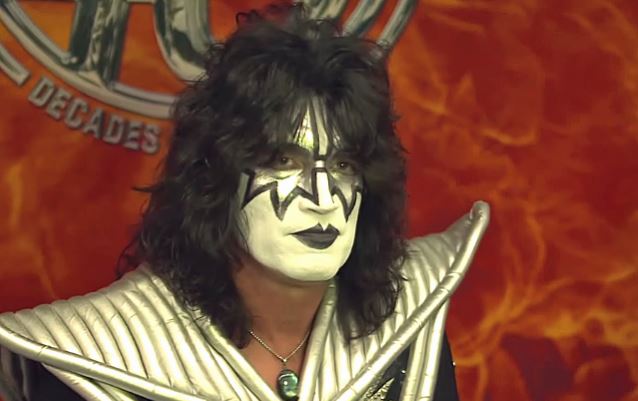 Juan Destroyer of MariskalRock.com conducted an interview with KISS guitarist Tommy Thayer on June 22 in Madrid, Spain. You can now watch the chat below.

Asked if there is a chance that KISS will make another studio album in the not-too-distant future, Thayer responded: "I hope so. But I can tell you that nothing's planned. But it doesn't necessarily mean that we won't do one either. I know that you've heard different things from different people. And, hey, people can change their minds and come up with… they have a different outlook next week or another month. So things can change. And if it is decided to do another record, suddenly we can be in the studio within a month doing a record. But [there are] no plans right now. But I wouldn't say it's completely out of the question."

KISS frontman Paul Stanley recently told Classic Rock magazine that it's not "utterly necessary" for the band to release a new album to follow 2009's "Sonic Boom" and 2012's "Monster" and insisted that KISS "can move forward without new music." He said: "There has to be a purpose to us doing an album.

"There was a time when we did albums because the contracts said so. But I only want to work now when it's justified."

He continued: "'Sonic Boom' was an album that very much needed to be done, and 'Monster' just felt like, 'Well, we did 'Sonic Boom' — let's see where we go from here.' Having accomplished that, I feel we can move forward without new music. There are enough things going on in KISS that right now it doesn't feel utterly necessary to make a new album."

Stanley did leave the door open to the possibility that he will change his mind. "Anything is possible," he said. "But at the moment I don't see it on the horizon. I'm not one to ever say 'never.'"