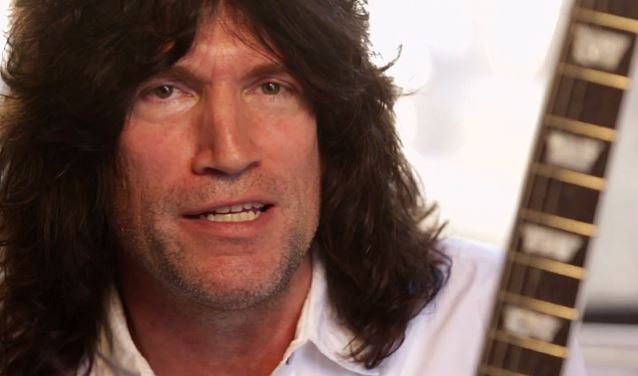 Musician's Friend visited KISS guitarist Tommy Thayer at his home in Lake Sherwood, California in February 2015 to talk to him about his new Epiphone White Lightning Les Paul guitar — the perfect instrument for KISS fans looking to shred along with Tommy's thunderous chording and epic solo work. Check out the footage below.

Asked how the White Lightning Les Paul is different from his signature Spaceman Les Paul, which came out in 2013, Thayer told Guitar World: "There are a lot of similarities. The look, design and color scheme are different, obviously. The pickups are different too. In the last year or two, I started using Seymour Duncan JB pickups again. I used them a long time ago. I was using Gibson pickups for a long time. I'm not sure why, but one day we put a set of JBs back in the guitar and it sounded great. It was just one of those things where you are chasing the sound; it was something different that piqued my interest."

Regarding how the neck and the body shape of the White Lightning Les Paul are different from those on his other model, Thayer said: "The neck is the same. It's somewhere between a 1960 and a 1959 profile. It's not a baseball bat, but it's not super-thin either. It's kind of in between, which I like more. The cool thing is it has this great white metallic finish. It's a really stark white. It isn't a pearl color like some of the Gibson Custom models. I wanted it to be a really striking guitar that would look great on stage. I wanted to have all the chrome parts to offset that. The pickup rings and pick guard are all chrome. Originally the idea was to do a chrome binding as well. It became difficult even for Gibson to figure out exactly how to do that. When they did the original two guitars last summer, the ones that were the inspiration for the Epiphone, we couldn't figure out how to do a chrome binding. I ended up using a three-ply black-and-white binding, which actually was a better idea. I think it looks great."