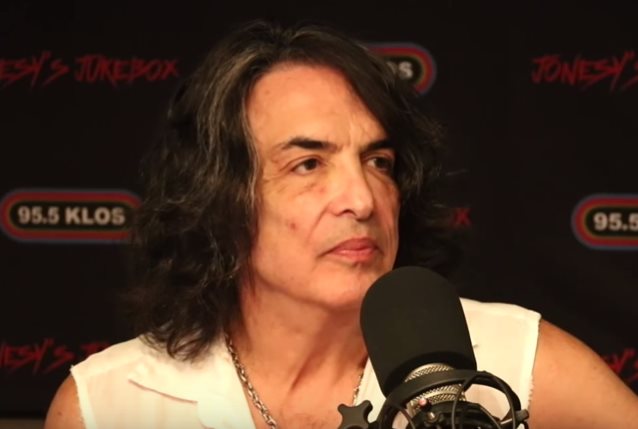 KISS frontman Paul Stanley was interviewed on the September 5 edition of SEX PISTOLS guitarist Steve Jones's radio show, "Jonesy's Jukebox". You can now watch the chat below. A couple of excerpts follow (transcribed by BLABBERMOUTH.NET).

On KISS's continued popularity around the world:

Stanley: "It's phenomenal. It really is. It must have been about two months ago, we did eighteen shows in Europe — all big shows; we did the O2, headlined a bunch of festivals — and it's phenomenal. I guess it's a phenomenon, and it just keeps going. I'm in awe of it and I'm a big fan of it, so I want it to continue."

Stanley: "In our case, you know what you're gonna get, or you've heard about it. It's interesting, 'cause almost every night, I say, 'How many of you people have never seen us before?' And it can be seventy percent of the people. And it's not nostalgia as much as people hearing this legend of this band that does a certain thing. And we do something and it's very identifiable. And happily, people not only accept it, but come back time and time again. So I'm blessed. I'm up there with a big smile. Everything is actually bigger, better. The band is terrific. Eric [Singer], our drummer, has been in and out of the band for twenty-some-odd years, and Tommy [Thayer, guitar] has been in probably about fourteen or fifteen years. So the band is stable. I mean, we've all been in bands where there's tension and stuff. It's great to be in a band where there's no tension — where everybody is just having a great time and we enjoy each other and actually look forward to seeing each other."

On KISS's 1979 single "I Was Made For Lovin' You", which was dismissed by some fans as a sellout:

Stanley: "It became a double-edged sword, because it became such a massive hit but it was also so contrary and contradictory to what we had done before. But, look, at that point in our history, we had so many problems. When we talk about fame and success, we were immersed in… We were becoming fat, wealthy musicians. We forgot what made us and why we loved what we did. It became sycophantic friends, girlfriends, people hired to open doors for us. It lost its balls — it really did — and 'I Was Made For Lovin' You' was a part of that. But we were in such a quandary at that point. Peter [Criss, original KISS drummer] wasn't on that album ['Dynasty'], and… I think we began to lose a base of fans. The funniest thing is when we do festivals sometimes in Europe where it's very much… the bands are quite heavy, well, when we do an encore of 'I Was Made For Lovin' You', you suddenly have all these people with spikes in their eyeballs or bones through their noses singing along. So it's a song that seems to transcend everything — although it went through a period, certainly, of a big backlash against it. But I just remember going to Studio 54 [in New York City], and Studio 54, I think, over time, what it really was has come out. Because I think at some point people thought it was like 'Saturday Night Fever' or some kind of disco with people in white suits. But it wasn't. It was hedonism. There were people all kinds of… whatever your vice was, it was available. But, honestly, I would just go there and people would dance all night. And all the songs were about now, the songs were all about the evening, about tonight. And I thought, 'Gee, I can write one of those.' So I set the drum machine to a hundred and twenty-six beats a minute, [starts singing] 'Tonight, I wanna…' Because it's tonight — it's always about now; we're not worried about tomorrow. So that's how that song came about. And although we all looked at each other and said, 'This is a bit of a stretch,' we also looked at each other and said, 'This song is undeniable. It's a no-brainer.'"

On whether he was responsible for writing "I Was Made For Lovin' You":

Stanley: "Yeah. Actually, me, I like to give credit where credit's due. I didn't invent the wheel. But it was me and a friend named Vini Poncia. That was mine and Desmond's [Child] first success together. I knew Desmond from New York. He had a band called DESMOND CHILD & ROUGE. He had this amazing band in New York with three girls, and the reason I went to see the band is 'cause I saw a poster of the girls. But he turned out to be a super, super songwriter, and the first thing we did together was work on 'I Was Made For Lovin' You'. And it was a stretch. But I think that sometimes we were held to a stricter set of rules: 'You can't do that. That's selling out. Let THE [ROLLING] STONES do that.' Or, 'Let this other band do that.' But, to me, it was, like… I'd like to think KISS was about not having any rules, and so we did that, and that's part of the freedom of creating. Everybody doesn't have to like everything: you're free to buy, not buy, come see us, not see us."

On KISS's decision to remove the makeup in 1983:

Stanley: "It's kind of multi-level. We had gone through… The two original guys [Peter Criss and Ace Frehley] were gone, and rather than keeping those images alive… Look, you can go anywhere in the world and you show a picture of KISS, and people say, 'That's KISS.' They may not know the names, but they know the images. We didn't really see it that way, and we thought, 'Oh, new guys, new images.' It became… We were one step away from having Turtle Man in the band. It was losing everything that it had. So my thought was, 'If we're not good enough to continue without the makeup, then we shouldn't continue. If it truly is just about the makeup and the look, then we don't deserve to continue.' So we took the makeup off, and it was kind of, like, you either sink or swim. The last album we did with makeup was 'Creatures Of The Night', at that point, and that album was not a real success, and it was quite a good album, I thought. And 'Lick It Up' was the next album, and that was non-makeup, and it probably sold six times as many copies. From '83 until '95, we were out of makeup. You can't compete with that makeup image, so people are, of course, gonna go, 'Well, it doesn't have the same gravitas.' But what people consider our 'lean' years were platinum-selling albums."

KISS did not perform — the Hall Of Fame wanted the original quartet only to play, while Stanley and Gene Simmons insisted on the current lineup performing as well. In the end, nobody won that battle.