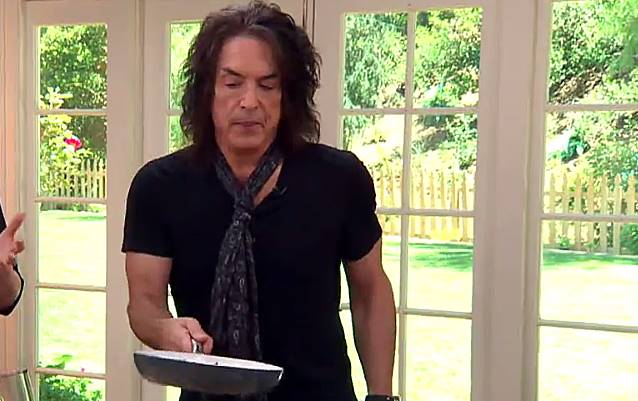 KISS guitarist/vocalist Paul Stanley demonstrated his home-cooking skills during an appearance on the June 3 edition of "Home & Family" on the Hallmark channel. Stanley showed off his culinary expertise in the kitchen with co-host Cristina Ferrare when they made his recipe for chicken marinade and Brussels sprouts. Check out video footage below.

Although Stanley has been vocal about his issues with co-founding members Ace Frehley and Peter Criss, he talks in the new book about the problems in keeping a partnership going with Gene Simmons over the decades, telling The Pulse Of Radio that it's taken a lot of work to keep the pair moving forward and on the same page. "Oh, sure," he said. "That over the years that's been an ongoing theme in our relationship. But time is the ultimate judge, and the fact that we've been together, at this point for, 40 — my gosh — almost 44 years says volumes. There have been times where I've been very angry and resentful — and I'm not saying momentarily — I'm saying for long periods of time. But, in time, everything falls in place and you get a better perspective — hopefully. If you don't expect from someone what's not possible, then you won't be disappointed.”

Stanley spoke frankly of a particularly icy moment in KISS history when, during the 1980s, Simmons seemed far more interested in an acting career than being the type of partner Stanley had come to rely on in KISS throughout the '70s. "It's much easier to do that when you know somebody else is gonna run with it. [Laughs] It's much easier to abandon ship when you know that someone is going to bail water. That was more than annoying and hurtful. It was unjust, because to cap that off — he still wanted to be paid equally. Well, that's insult to injury. Who gets paid for not doing their job? Doesn't work like that."