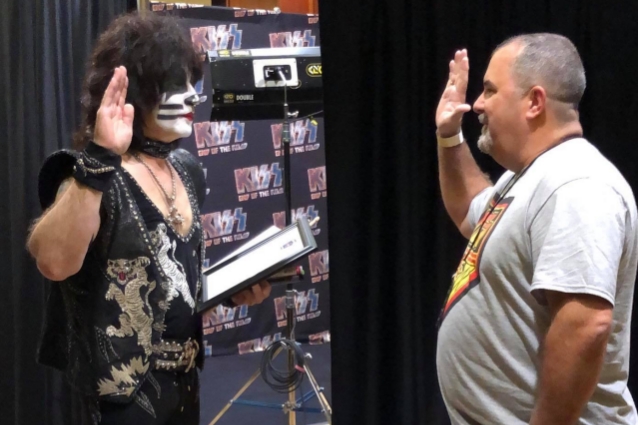 KISS drummer Eric Singer has been sworn in as an "honorary corporal" by the police department in Wharton, Texas.

Wharton police chief Terry David Lynch performed the swearing in before the band's concert Monday in Houston, with Singer in full "Catman" makeup and the police chief wearing a KISS t-shirt. Singer accepted the lifetime position, a formal letter from the chief, and a custom shadow box bearing the department's insignia for presentation purposes.

The letter from the chief to Singer read in part: "On behalf of Chief Terry David Lynch, and the men and women of the Wharton Police Department, we appoint you to the rank of Honorary Corporal with our department, in grateful acknowledgement of the honor and respect you show all of America's dedicated law enforcement heroes and their families.

"The Corporal badge presented to you today has been selflessly worn by many within our department and today, it begins a new chapter with you. We ask that you display it proudly as it represents our commitment to protect those who call on us in times of danger, and in remembrance of the nearly 24,000 officers who have paid the ultimate sacrifice since 1791."

The End Of The Road" farewell tour launched in January and is expected to run through at least the end of 2020.