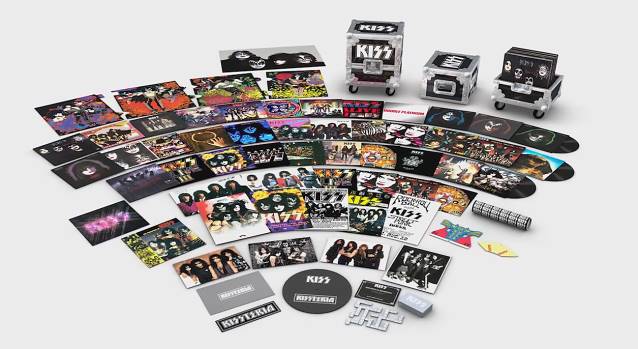 This year marks the 40th anniversary of rock and roll giants KISS and in true KISS fashion, the band is making 2014 the biggest and loudest, non-stop rock and roll party of the century.

Rock legends KISS were the first signing to Neil Bogart's newly formed Casablanca Records label after he saw and recognized their talent and showmanship during their spectacular performance at a showcase concert at New York City's Le Tang's Ballet Studio in 1973, offering them a contract on the spot. Four decades after releasing their self-titled, major label debut, KISS was inducted into the Rock And Roll Hall Of Fame on April 10, proof of the unparalleled devotion and loyalty of the KISS Army to the "Hottest Band in the World" as they rallied together to have the band included in this year's induction ceremony.

Having earned 28 U.S. gold albums along with 40 million U.S. and 100 million in world sales, Gene Simmons and Paul Stanley, with longtime members guitarist Tommy Thayer and drummer Eric Singer, are stronger than ever with a legacy that continues to grow, generation after generation. Their last album, "Monster", proved that they are still at the top of their game with impressive sales and topping the charts worldwide debuting at No. 3 in the U.S. on the Billboard 200 best-selling albums chart and Top 10 in twenty other countries.

For the ultimate KISS collector, with only 1000 copies being produced worldwide, "Kissteria - The Ultimate Vinyl Road Case" is a highly-collectible vinyl road case box set featuring 34 KISS LPs including nineteen studio albums, all five of the "Alive" releases, the four original KISS solo albums, each with exact replicas of the original inserts, plus six exclusive vinyl titles that will not be made available individually. All albums are pressed onto audiophile 180-gram vinyl and are newly remastered from the ultra-high definition Direct Stream Digital transfers from original analog tapes to bring out maximum fidelity of these iconic albums.

Exclusive "Kissteria" extras include eleven 11"x17" archival posters, including the band's very first promo poster; a KISS vinyl cleaning cloth; a KISS turntable mat; a set of KISS dominoes; four band lithographs highlighting four decades of the band; and a certificate of authenticity displaying the limited edition number for each of the individual box sets.

Forty years ago KISS released their eponymous debut album, which would propel the band to the top of the rock and roll hierarchy where they have reigned for the past four decades making the KISS legacy a global brand with more than 3,000 licensed merchandise products, including a recent partnership with the Arena Football League as owners of the Anaheim-based expansion team LA KISS.

Custom ANVIL Road Case to house 34 KISS LPs and a plethora of extras.

A behind-the-scenes look at the making of "Kissteria - The Vinyl Road Case" can be seen below.