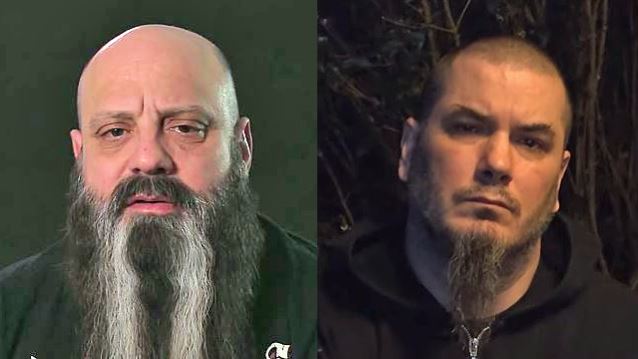 CROWBAR frontman Kirk Windstein has commented on the incident over a month ago when ex-PANTERA singer Philip Anselmo said "white power" and made the Nazi salute on stage. Anselmo later claimed he was referring to drinking white wine as part of an "inside joke" but has since released a video message, saying that he "deserves completely" the "heat" that he has been getting over his actions and claiming to be "a thousand percent apologetic to anyone that took offense to what [he] said."

During an appearance on HATEBREED frontman Jamey Jasta's official podcast, "The Jasta Show", Windstein — who was bandmates with Anselmo in DOWN from 1991 until 2013 — stated about Philip's actions: "I don't condone what he did at all, and I wanna go on record as saying that. But if I was to come out now and make some big statement [about it], [it would look like all] I am doing is trying to get my name in the press and beating a man that's already down in order to do that. After it immediately happened, I understand making a statement, and I thought Pepper's [Keenan, DOWN guitarist] statement was great. I thought he hit the nail on the head with what he said. Of course, I can't condone any of it, but for me to come out and make a public comment on it would be stupid right now; there's no need for it. It's not gonna make the situation better or worse. It's just unnecessary."

Windstein added: "It was a big story, and rightly so, but it's… To me… I always quote Phil, which is ironic, 'cause we're talking about this. Yesterday don't mean shit. And that does not mean by any means that I condone what he did. That's Philip's actions and that was his choice. I don't condone it, but it's in the past. And we can only hope that he can better himself and move forward and try to [get] some type of positivity out of this unfortunate incident."

In a message posted to his personal web site in the days following the incident, ANTHRAX guitarist Scott Ian suggested Anselmo show how sincere he is by making a donation to Jewish human rights organization the Simon Wiesenthal Center. He also wrote: "Philip's actions were vile and that should be the focus here; anything else is just noise."