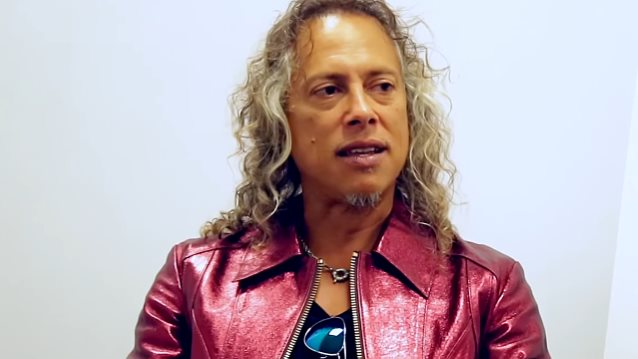 METALLICA guitarist Kirk Hammett recently sat down with Mexico's Luisito Rey to view and rate several off-beat METALLICA covers that have been making the rounds on YouTube the past few years.

The clip starts off with Hammett watching Rob Scallon's popular banjo cover of "Master Of Puppets", which has been viewed nearly two and a half million times.

"It's amazing, at first, that they would take the time to learn the song," Hammett said. "And I think they probably had to learn it on the guitar, and then they'd have to pick up the banjo and transcribe it for the banjo. And so I have to give them credit, because they put a lot of work into it — a lot of work and effort. And you know what? The playing is right, so I have to just give it a 5 [out of 5]."

Hammett then goes on to watch a clip from THE BEATLES / METALLICA mash-up band BEATALLICA, a "Metallica For Babies" clip (featuring lullaby versions of METALLICA classics), a few Latin covers and more.

Check out Kirk's reactions below.