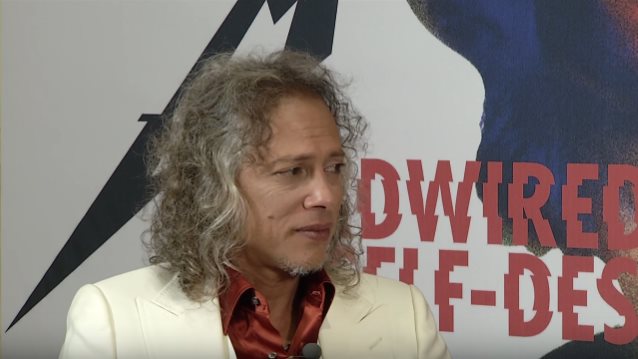 Joanna of Mexico's RMX radio recently conducted an interview with METALLICA guitarist Kirk Hammett. You can now watch the chat below.

Speaking about METALLICA's mindset going into the songwriting process for the band's new album, "Hardwired… To Self-Destruct", Hammett said: "I think going into this, the attitude was that we were gonna make something that was similar in attitude to the attitude that was on 'Kill 'Em All'. That was the idea going into it, at the beginning. Of course, we're not gonna write another 'Kill 'Em All'. So the end result is where we kind of ended up after writing all that type of music. This album is a pretty accurate representation of just where our heads are at musically and what we are interested in playing. These days, what really excites is the more uptempo, energetic stuff, the more bouncy, groove-oriented stuff. The more melodic stuff, like guitar harmonies, is still very much a part of our sound. It's just what we wanna hear in our music. And if it's similar to '…And Justice For All' and 'Kill 'Em All', great."

Hammett also talked about the evolution of the themes covered in METALLICA's lyrics. He said: "I think as far as emotional awareness and emotional intelligence goes, we've grown quite a bit — especially in terms of us just being aware of different emotional states of mind and how we all just kind of occupy different states of mind all the time. And I think, somewhere along the line, there was a real shift in where James's [Hetfield, guitar/vocals] lyrics became more about, 'Yeah, we know that it's a fucked up place, but this is what I'm gonna do to try to make it a little safer for myself and hopefully for the people around me.' And that's a pretty major shift. And it's also him just calling it as it is, and making people just aware of just how it is."