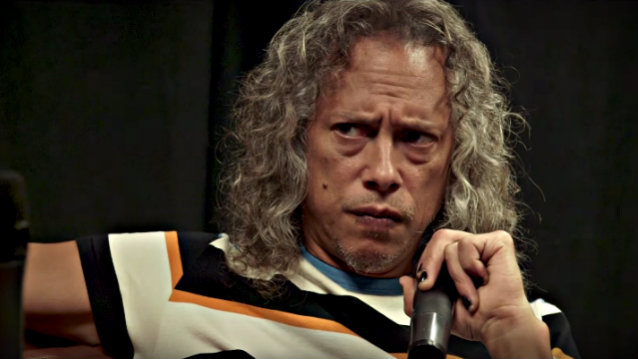 Kirk Hammett says that it "would be nice" if METALLICA could take less than eight years to release the follow-up to the "Hardwired… To Self-Destruct" album.

Aside from touring, METALLICA had spent much of time between the release of 2008's "Death Magnetic" and 2016's "Hardwired" on other projects, including launching a music festival, collaborating on an album with the late Lou Reed and making a feature film.

Asked by Donny Fandango of 105.7 The Point radio station before METALLICA's June 4 concert at Busch Stadium in Saint Louis, Missouri if he thinks it's possible that the band will release the next studio album before another eight years have passed, Hammett said (see video below): "That would be nice. I don't believe we've done something like that since, I guess, around the 'Load', 'Reload', 'Garage Days Re-Revisited', 'S&M' kind of period where there was just like a real concentrated period of output. It'd be nice to get to that, because we were still kind of actively touring behind an album, but we had these other things coming in too that kind of changed the tone of the tour that we were on and introduced other cool different songs and different factors. Like when the 'S&M' thing came out, we were, all of a sudden, playing with a symphony, which was quite a different thing. So if we could do something like that, it would be great, but this is a really big machine and sometimes it takes time to steer it this way or steer it that way in terms of pure inertia. It's an effort."

The North American leg of METALLICA's "WorldWired" 2017 tour kicked off on May 10 in Baltimore, Maryland and is hitting stadiums in 25 cities before winding down in mid-August. Support on the quartet's first North American trek since 2009 is coming mainly from AVENGED SEVENFOLD and VOLBEAT, with GOJIRA taking over for the latter group for the last six shows.