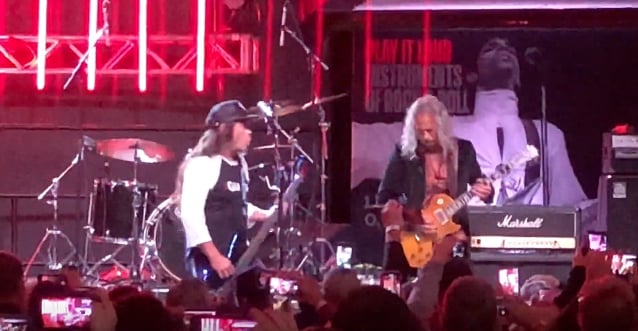 Kirk Hammett and Robert Trujillo performed a METALLICA medley at the launch of "Play It Loud: Instruments Of Rock & Roll" at the Rock & Roll Hall Of Fame in Cleveland on Thursday, November 21. Video footage and photos of their appearance can be seen below. Also available is a video interview with WKYC Channel 3.

Other musicians who appeared at the event were Don Felder, formerly of THE EAGLES, and Nancy Wilson of HEART. All special guests had instruments included in the iconic exhibit. According to Cleveland.com, Hammett joked that he hadn't seen his ESP "Spider 13" guitar in eight years, while Trujillo remembered playing his "Aztec De La Chloe" bass, which he collaborated on with his artist wife Chloe, on the "World Magnetic" tour.

"Play It Loud: Instruments Of Rock & Roll" celebrates the iconic musical instruments that gave rock and roll its signature sound. Co-organized with The Met, the exhibit offers a rare, in-depth look at the instruments that inspired the musicians and made possible the songs we know and love. "Play It Loud: Instruments Of Rock & Roll" is the largest single exhibit the Rock Hall has ever displayed and takes over four floors. Fans can expect spectacular new acquisitions and adaptations that make the show unique to its venue. Instruments showcased span from 1939 to today and many have never been displayed outside of their original concert performance settings.

From Bruce Springsteen's guitar to a flamboyant costume worn by Prince and psychedelic strings used by Jack Bruce of CREAM, fans can examine personal items up close.

The exhibit was previously on display at the Metropolitan Museum of Art in New York.

Massive fun last night at the opening party for the “Play It Loud” exhibit at the Rock & Roll Hall of Fame in Cleveland...