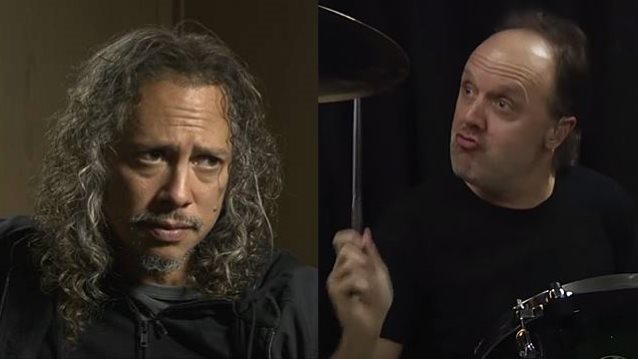 On November 4, METALLICA guitarist Kirk Hammett was interviewed on the "Quinn & Cantara" morning show on Albany's classic rock radio station PYX 106. You can now listen to the chat using the widget below. A couple of excerpts follow (transcribed by BLABBERMOUTH.NET).

On the progress of the recording sessions for METALLICA's follow-up to 2008's "Death Magnetic":

Kirk: "You know, I can't really put any sort of markers on how far we are along. All I can tell you, man, is we're working on it. And sometimes it goes quickly, sometimes it doesn't. Right now, I'm waiting to go in and throw down some guitars. As it stands right now, we're trudging away at it. Most likely it will come out next year — in a perfect world, if we can keep to our schedule. And we'll see. That's all I can really say."

On whether it really takes four years to make an album, from beginning to end:

Kirk: "No. The reason why it's taking us so long is 'cause we have all these other things on our schedule. I mean, we made a movie, we did an album with Lou Reed, we're doing all these other small, little tours. What it really is, our schedule is so full that it's affecting our [writing and recording] schedule. I mean, if our schedule was empty and all we had to do was concentrate on writing and recording an album, we could probably do it in a year or a year and a half. But other things are on the schedule. And, you know, we all have families, life gets in the way, blah blah blah.
But I think if we were totally focused and we had nothing [else to do], I think we could get an album out in about a year and a half."

On whether there is any truth to the rumors that METALLICA needs to make albums and stay on the road in order to generate revenue to cover some of the money-losing investments — such as the "Through The Never" movie and the Orion Music + More festival — from the past couple of years:

Kirk: "Well, we're gonna make an album regardless of anything like that. 'Cause, as musicians and as artists, we feel the need to, you know, go out there and make albums. Having said that, we need to play a certain number of shows every year just to keep the METALLICA machine rolling. And that, as well, kind of interferes with our schedule. If we were the richest men on earth, we'd still probably wanna be artists about it and make albums… And, you know, to a certain extent, you are right: these projects take money, there's a cost attached to them, and that's another reason to keep it all going, 'cause we want the METALLICA machine to run as smoothly and as efficiently as possible. And if that means we have to play, you know, 15-20 gigs a year, so be it."

On whether there is any truth to rumors that METALLICA planned to fire drummer Lars Ulrich back in the mid-'80s:

Kirk: "You know, that was just an old thing, you know. I think at one point or another, we were pissed off at Lars, around maybe 1985 or something. We were unhappy and we might have grumbled something to someone. And then that person might have picked up on it and made it something a lot bigger than it actually was… To be completely honest, [Lars] has a lot of drive, and that's a part of the reason why I love the man. His drive and his motivation is just so intense, you know."

The story of METALLICA's alleged dissatisfaction with Ulrich gained credence back in 2009 when former METALLICA guitarist and current MEGADETH frontman Dave Mustaine revealed to Rolling Stone magazine that he was told by Ian that on the last METALLICA tour Cliff Burton was on before the bassist died, METALLICA was planning on kicking Ulrich out at the trek's end. Mustaine said, "That's what Scott told me. He said that when METALLICA got home, that James, Cliff and Kirk were going to fire Lars."

For his part, Ian never denied telling Mustaine about METALLICA's alleged plans to replace Ulrich and has gone on to recount the story in his autobiography, "I'm The Man: The Story Of That Guy From Anthrax", which was released in October 2014 via Da Capo Press.

Speaking to Sid Black of the 94.3 KILO radio station in Colorado Springs, Colorado, Ian says about the incident: "A lot of people have been asking me about this, and that story's actually been out there for a long time.

"I'm not outing this; that would never be my intention. My book's not like an exposé; it's not that kind of a book.

"But yeah, the story was that they had made a plan that they were gonna make a change and get a new drummer. We were all kind of blown away by that, because it was the four of them. It was just, like, 'Wow! Really?' And they were, like, 'Yeah. When we finish this tour, we're gonna find a new drummer.'

"What could I do? Just as a guy who was friends with all of them, you feel, 'That's a bummer for Lars. That sucks.' And at the same time, you hope that your friends can continue on and do what they wanna do with themselves.

"Obviously, history turned out differently for METALLICA and they went on to become, arguably, one of the biggest bands on the planet. So I'm just glad it all… obviously it all worked out for my friends. [It was a] horrible tragedy that Cliff was killed in that bus accident."

Despite the fact that Hetfield, Hammett and Burton appeared determined to get a new drummer, Ian says that "I honestly think it wouldn't have happened. 'Cause, believe me, I've thought about it quite a bit over the years. I honestly think that the tour would have finished and I think cooler heads would have prevailed, maybe, and I don't think the change would have taken place. That's what I believe."

Speaking to Classic Rock magazine back in 2009, Mustaine was asked if he regretted breaking the story about METALLICA's alleged proposed sacking of Lars Ulrich. "No," Mustaine replied. "It was something Scott told me. I was trying to help him promote his autobiography. I love Scott and would never do anything to hurt him — never. But it's what he told me and I know other people who've heard it, too."

He continued: "With all the things that are out there on the Net, I know that Scott's having a bad time. People are starting to say, 'We believe Dave and Scott's a liar. He lied about the thing with Dan [Nelson, the singer who controversially parted company with ANTHRAX].' That's the last thing I wanted. I love Scott. I wish I could just make this thing go away. But I didn't say it, he did."