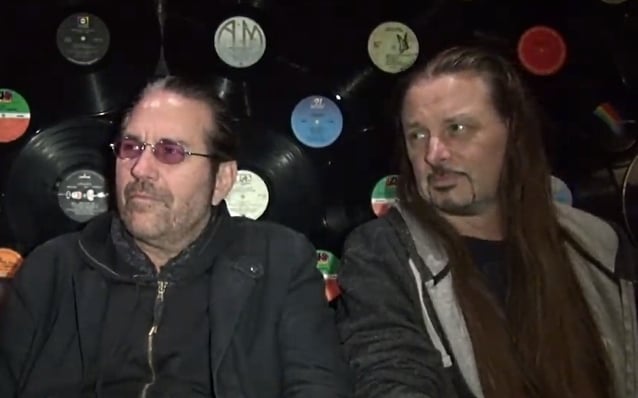 Sally Steele of Vegas Rocks! Magazine conducted an interview with WINGER bassist/vocalist Kip Winger and lead guitarist Reb Beach prior to the band's November 23 show at Vinyl at Hard Rock Hotel in Las Vegas, Nevada. You can watch the entire chat below. A few excerpts follow (transcribed by BLABBERMOUTH.NET).

On whether they think '80s bands never get any respect for their work:

Kip: "I don't know. I think they're starting to get respect again, right? There was a period when the grunge thing hit and we were all the bands that sucked — on, like, 'Beavis And Butthead' and all that stuff — so all the respect went down. But I think it's gone way up now. I think the bands that were really big then — like DEF LEPPARD — they're still selling out arenas. And they're [being inducted into] the [Rock And Roll] Hall Of Fame."

On whether WINGER will ever be inducted into the Rock And Roll Hall Of Fame:

Kip: "That will be a cold day in hell. That will never happen."

Reb: "But I'm always surprised at the amount of people that come to our shows. And all of us '80s band people know each other. We all do the same shows in the Midwest and parts of the country that really appreciate that music. We get lots of people out there, and they all have such a great time. It's just good-time music."

On Kip being a "sex symbol" during their 1980s heyday:

Kip: "I was totally comfortable with it. I went through — we all went through that phase. 'Cause it's the Paul Stanley [KISS] factor — you wanna be a total rock star; David Lee Roth [VAN HALEN], Paul Stanley kind of vibe. But then, musically, we're putting more sophisticated… I don't wanna make value judgments about the music, 'cause KISS is amazing, but there's technically more difficult stuff going on in our music, which we intentionally did that. But being a sex symbol and all that stuff, that was fun. I was a kid, and it was a blast. I did well."

On whether there was instant chemistry when WINGER formed in 1987:

Reb: "It was when we wrote together the first day."

Kip: "It was weird. When we finally got past my solo thing.I had a solo thing that I asked Reb to play some stuff on. Then we called it VICEVERSA, but it wasn't really a band. It was my songs and Reb played on them. But when Reb and I actually started writing, then that's when really the band began. Because Reb's a riff-meister. 'I got this one riff I've had since I was 15.' It was 'Seventeen'. I'm more of a song arranger. He writes great riffs and I know how to arrange, so the chemistry became really obvious early on. We made a commitment to not take any outside work for about six months to see how far we could get, so we wrote the whole first album in those six months."

On the future of rock and roll:

Kip: "There's so many fans all over the world that are still going to see rock shows."

Reb: "I opened GUNS N' ROSES [in Mexico] last week [with WHITESNAKE] and there were 50,000 people there. So, it's still happening. I'm doing Download [festival] next year. Giant shows."

Kip: "Rock is alive and well. It's just that there's a lot of other things out there that are popular. But that was always the case, I think — different genres. It's just that now everybody is so exposed to them all, and there's so much access to them through your phone. It just seems like we get inundated with all these different styles. But I think, ultimately, it really helps everyone's creativity. And then you hear all this fusion stuff coming — like country music has a lot of R&B influences. And in the '90s, it sounded like DEF LEPPARD, 'cause [producer] Mutt Lange was doing it. We just stick to our lane and we do what we do and if people dig it, that's great for us. 'Cause we're still doing it after 30 years, so that's cool. We're not huge, but we do well and we enjoy it."