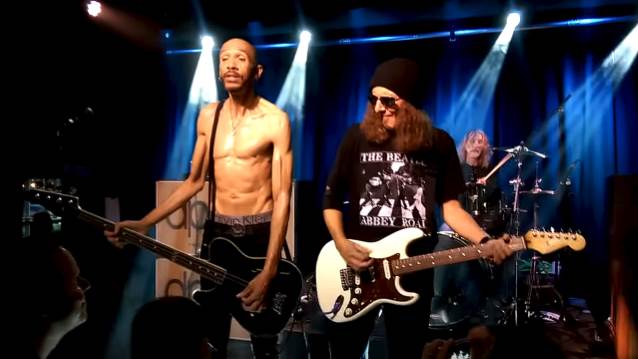 KING'S X drummer Jerry Gaskill has confirmed to "The Drum Shuffle" podcast that the band is preparing to enter the studio to begin working on the long-awaited follow-up to 2008's "XV" album. "We are definitely talking about it, and we are actually making plans," he said (hear audio below). "And so, most likely, there will be a new record, possibly even next year."

Adding that KING'S X is "always writing" new music, Gaskill revealed that he and his bandmates have "gone past the pre-discussion stage" and are now "maybe in the full discussion stage." He said: "So I think that's kind of where we're at — maybe a little bit past the discussion stage. But there's no time limit, there's no pressure. It will happen when it happens, but… it's gonna happen, and I think soon."

In a 2016 interview with The Sacramento Bee, Pinnick said that KING'S X wasn't in a hurry to work on new material.

"We have a lot of songs to choose from [for performances], and that's probably why we haven't done a record in so long," he said. "In a way, we've kind of pulled all the tricks out of our bag.

"To this day, we're perceived by our fans and outsiders as some huge thing even though we never had a really big hit," he added. "I just think we weren't considered a good flavor so we were left on the shelf."