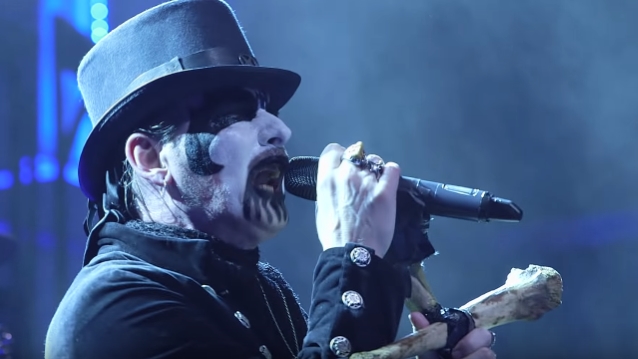 The official trailer for KING DIAMOND's forthcoming DVD and Blu-ray, "Songs For The Dead Live", can be seen below. The set, which is expected in the coming months via Metal Blade, will contain two full KING DIAMOND shows, filmed on June 17, 2016 at Graspop Metal Meeting in Dessel, Belgium and November 25, 2015 at The Fillmore in Philadelphia, Pennsylvania. The massive, multi-camera Philadelphia shoot was directed by Denise Korycki, who has previously worked with CANNIBAL CORPSE and KILLSWITCH ENGAGE.

KING DIAMOND's singer and namesake told Vanyaland in a 2015 interview that the idea to perform "Abigail" came about innocently enough. "It's not like some big thing came around," he said. "We planned on doing a headline tour and after we did Mayhem [Festival], we were, like, 'Do we do this and not do our headline tour?' And then it was, 'No fucking way'; we had to do our headline tour that we talked about doing. It was there I came up that it would be nice to do a very different set and that would be the right way to do it. We have never done it. And I know some people are writing in comments, 'Oh, I saw it back in 1987.' Well, you really didn't, because we never played all the songs in one go — never. Not even when the album first came out. It's become a thing that is really good seeing, and I don't think we ever did anything that was this awesome to watch. It's turned out to be amazing."

Asked what he thinks makes "Abigail" so enduring thirty years after its original release, King said: "It was the first concert we ever did. 'Fatal Portrait', half the album, say, was a mini-concert. But that was the first concert where we jumped in with both feet, you know? It had a heavy impact as such, and it was the first horror concert — ever. I don't know any other band that had a horror concert as an album. And no band still sounds like us, in my opinion. It's like the first time I ever heard BLACK SABBATH; I had never heard anything close to it — such a heavy band, that first album. But after you do the he second, the third, the fourth, the impact is less, even though the albums may be just as striking. That's how it is, so it has a lot to do with that, I'm sure."