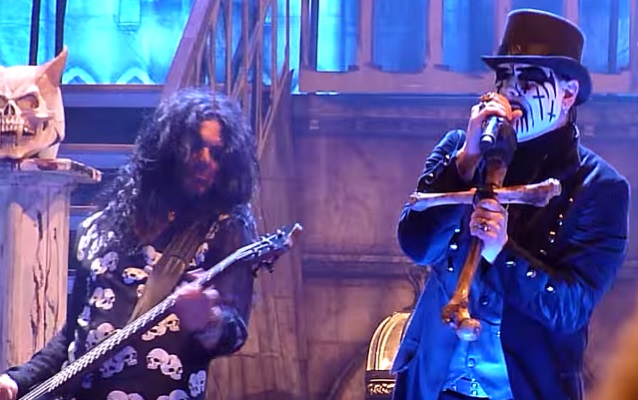 Danish heavy metal singer King Diamond has slammed Hal Patino, the former bassist of King's namesake band, for "putting out extreme lies" about King and the circumstances regarding Hal's latest departure from the group.

After King announced Hal's exit from KING DIAMOND, Patino released a statement of his own claiming that he was offered a "totally ridiculous" salary for the band's five shows this summer, calling the move "disrespectful" and insisting that he quit the band in disgust two days before King announced Patino was "relieved of his duties" as the bassist for KING DIAMOND.

King Diamond has now released the following statement in response to Hal's comments:

"When someone puts out extreme lies about you and your character, there comes a time when you put a stop to it. This is that time.

"In the following, I will prove everything I say and I challenge Hal Patino to do the same with what he said.

"Hal's statement: 'I will not go into every detail, but the salary I was offered to headline Wacken Open Air and the four other shows this summer was totally ridiculous. Two days before the first rehearsal day, I wrote an e-mail explaining my view on that topic along with a proposal for a fair and realistic salary for these shows, For this, they accused me of 'blackmailing'! I found it disrespectful, and told them that if that is how I get treated after 19 years, we part immediately! So I already left the band on Thursday the 17th of July, by my own choice.'

"First of all, I have no problem disclosing the band salary for the European shows. For these 5 shows, it is €1000 per festival show. This salary does not include per diems for days not played on (which is on top of the salary), plus all shipping, travel, maintenance, strings, drum sticks, insurance, hotel; in short, the company bears all expenses.

"I'm not gonna get into details on how our registered company in Denmark is run, but it's a full company with year-round expenses, and if it wasn't for Wacken this year, I could guarantee that there wouldn't be a U.S. tour in the autumn.

"The two indoor shows in Berlin and Tilburg are straight losses, even if sold out. On top of this comes EVERYTHING involved in a tour and our company is, unfortunately, not at the level of MEGADETH, SLAYER, etc, and can only offer what's possible.

"We can't go and get loans in the bank to pay Hal's salary, however minor it may seem. If Hal didn't find that satisfactory, no one kept him from leaving. I just wish he hadn't brought this up on the very day/evening I arrived in Denmark (17th of July). He's had an entire year to think about this, and he brings it up now.

"An important fact with regard to the salaries is that the entire crew and band from last year's European tour is identical to both the European shows we're about to do now and the U.S. shows later this year, except for Hal.

"It seems everybody is satisfied with what the company can offer at this point, except for Hal.

"It doesn't interest me one way or another whether Hal quit the band or he was asked to leave. It's exactly the same result.

"It is interesting though that Hal shipped his gear at the company's expense to the rehearsal facilities on the very date (17th of July) when he claims that he quit the band. We have the receipt for that with stamped date. You can also see in his official statement that he says that he was willing to try to fly in for some of the early rehearsals from Norway. We're talking after the 17th of July, which again, doesn't make sense. Why would he want to try to arrange to fly in for rehearsals from Norway after he already quit the band?

"Hal's statement: 'It's typical King to say that I'm fired — he did the same to me back in 1990 when he told the press that I was kicked out of the band due to lack of enthusiasm and drug problems. That was NOT the reason … It was just too much touring, King got dropped by Roadrunner Records, and I wanted to go in another direction. He did the same to my best friends Mikkey Dee and Pete Blakk.'

"These are extremely insulting and pathetic lies.

"First of all, would Hal EVER have come back to play for KING DIAMOND if I had lied to the press about him being fired in 1990 due to drug problems?

"Hal was taken back into the band sometime after he had asked us in 2000 (I believe it was) at one of our rehearsals, which he was attending with his son, if he could ever get another chance. He swore he was totally clean and that he didn't even drink anymore. This, back then, made him a true hero to me, but this has, of course, changed now. I just don't trust him enough anymore to rely on his contributions.

"Next, can anybody explain to me what it means when Hal says that the reason he was fired was instead 'too much touring'? What does this mean? When did anyone ever get fired for too much touring??

"I would like Hal to present the letter from Roadrunner saying they were dropping us from the label, if he can. This is another outright lie.

"Most of you already know that we bought our way out of Roadrunner by delivering to them 'King Diamond Abigail Live 1987', plus 'Mercyful Fate - Return of the Vampire'. I also have the contract to prove this, and will gladly scan it in for all to see when I return to Dallas.

"The whole problem with trust culminated while we were in the studio recording 'The Eye', at which time Ole Bang [KING DIAMOND and MERCYFUL FATE manager], Andy La Rocque [KING DIAMOND guitarist] and myself can vouch to the fact that Hal Patino was not to be found anywhere when he was supposed to lay down bass tracks. No one could find him, no matter how many phone calls we placed. We ended up spending seven days watching the walls of expensive Sweet Silence studios in Denmark with absolutely nothing to do but sit and hope that Hal Patino would show up at some point. This is actually part of the reason why we had to buy our way out from the Roadrunner contract. We were so underrecouped that the label, with good reason, I guess, wanted to take the over expenditure off our next recording budget. This was simply not an option if we were to continue as a band at the time.

"Seriously, Hal, how dare you accuse me of having fired Mikkey Dee?! You might have forgotten, but both Andy and I remember very well Mikkey coming by Sweet Silence studios during 'The Eye' recordings to play us the new DOKKEN album, which he had just recorded with them.

"I have never uttered a bad word about Mikkey, whom I've always had the highest respect for, both as a drummer and as a person. And he knows that.

"Pete Blakk had some problems like you during the recording of 'The Eye' and the U.S. tour prior to that, which at the time made him unreliable. A situation I think everybody knows he took care of in a very noble way.

"Hal's statement: 'I am in Norway at the moment and will play two live shows with my other band, I told the KING DIAMOND camp that I would be able to fly back and forth so I did not miss the two first rehearsals — and the next thing I read is a statement from King where it says that I'm fired.'

"Again, how is it possible to fire someone who has already quit???

"I would like to address Hal, if he reads this.

"Personally, I don't care if it says you quit, was let go, or whatever with regards to what has happened, but we will obviously never be working together again. There is no trust left.
We can stop it at that, or you can continue if you want, just don't forget that I know so many of the people you associate with just as well as you, and I know what's going on in your life.

"Your real problem is really not what we've been talking about these past couple of days, right?

"You know, in the end, I'm really trying to be nice about this."