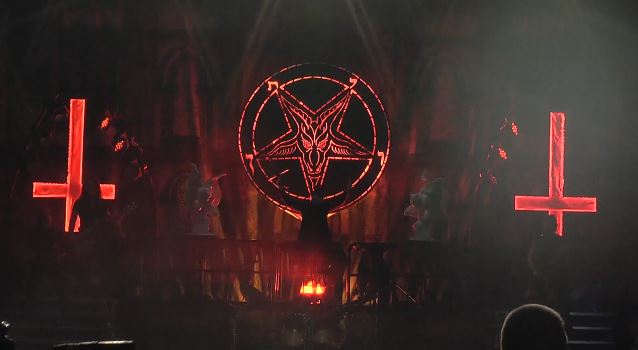 Quality fan-filmed video footage of KING DIAMOND's July 3 performance at Ak-Chin Pavilion in Phoenix, Arizona as part of this year's Rockstar Energy Drink Mayhem Festival can be seen below.

In a recent interview with Full Metal Jackie, King Diamond stated about his plans for the band's next studio album: "I was supposed to be in the middle of writing right now, when suddenly we were… We were planning our own tour for this autumn, and suddenly we got the offer of doing [the Rockstar Energy Drink Mayhem Festival]. And it kind of put a stop to the… 'Cause [my] home studio is ready now to go, but this [tour] is very important to do. So we don't wanna be rushed with writing a new album anyway. So we are gonna take our time, and it's gonna be the best you've ever heard from us — there's no doubt in my mind — 'cause we have all the tools at our fingertips this time. But it has put, you can say, the brakes on starting that process, so we'll pick it up when Mayhem is done. But it's always great to come off a tour and then start writing, 'cause you are very, very inspired. I am, certainly."