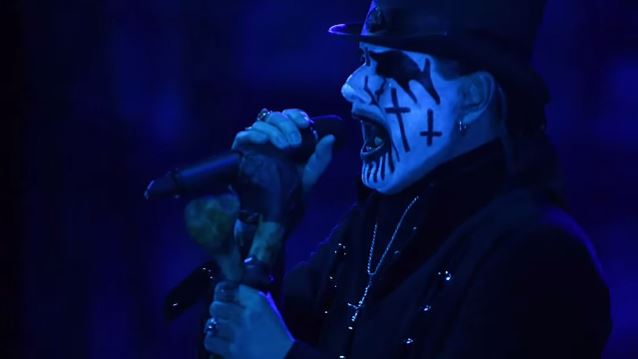 Full Metal Jackie: MERCYFUL FATE has had a lot of influence on a lot of bands. Do you feel at all uncomfortable when fans share the impact you've had on them?

"It's great to hear. I mean, I was very lucky the other day. I went and saw my friends in VOLBEAT play here in Dallas. And ANTHRAX was supporting. I met [ANTHRAX guitarist] Scott Ian before, but I met all of [the ANTHRAX guys] this time around and got to really talk to them. And what an amazing bunch of guys. I mean, really great human beings — nice people. It was amazing. And they just played and put on an amazing show. So it was a very good evening, and it was great to meet [them]. And they also were talking about: 'Hey! Let's do [MERCYFUL FATE's] 'Evil'.' [And I said] 'Okay, I can do 'Evil' in my sleep, so we can do that, if you want to.' And then one of the other guys said: 'Hey, there's a little more to it than just that.' It can quickly go wrong if you have not tested it properly. So some other time we'll do it. But I remember, the drummer [Charlie Benante] said that he could play the entire 'Melissa' album, if need be. So it's nice to hear that people are really that into that old music still."

Tell us, what makes the Rockstar Energy Drink Mayhem Festival a good starting point to thinking about making new music?

"Well, it's always great to do when you're on tour. I mean, I was supposed to be in the middle of writing right now, when suddenly we were… We were planning our own tour for this autumn, and suddenly we got the offer of doing [the Rockstar Energy Drink Mayhem Festival]. And it kind of put a stop to the… 'Cause [my] home studio is ready now to go, but this [tour] is very important to do. So we don't wanna be rushed with writing a new album anyway. So we are gonna take our time, and it's gonna be the best you've ever heard from us — there's no doubt in my mind — 'cause we have all the tools at our fingertips this time. But it has put, you can say, the brakes on starting that process, so we'll pick it up when Mayhem is done. But it's always great to come off a tour and then start writing, 'cause you are very, very inspired. I am, certainly."