This November, Philip H. Anselmo's Housecore Horror Fest will celebrate its third year of audio and visual bedlam. Set to commence in San Antonio, Texas at the Aztec Theater (201 E Commerce St.) on November 13 -15, the horror-themed film and metal gala promises to be louder, gorier and more bludgeoning than ever before boasting two film-screening rooms, multiple vendors, special artist signings throughout the weekend and what's morphing into one of the most debilitating lineups of the year!

And the awesome won't stop there. The fest has expanded the range of its grotesqueries, with a second stage located just steps away from the Aztec Theater. The Korova, at 107 E. Martin St. in San Antonio, will play host to even MORE bands throughout the weekend. Stay tuned for additional band announcements for The Korova in the coming weeks.

Comments Anselmo: "I am beyond excited to announce that the mighty KING DIAMOND will be attacking the house on Friday the 13th at the Housecore Horror Festival. All hail the King."

Adds Maryland Deathfest co-founder Ryan Taylor, who's shaping this year's Housecore Horror Fest lineup alongside Anselmo: "It's been a lot of fun piecing together this lineup with Philip. It's gonna be a wild one, so get your tickets while you still can!"

Besides showcasing the best in extreme metal, the festival will screen film gems from the personal vaults of both Anselmo and late festival co-founder, Corey Mitchell. Horror filmmakers are also encouraged to submit their films and winners will be selected in various categories and given the coveted Rot-Scar Award. And yes, Anselmo does watch them all.

For rules and deadlines, visit www.housecorehorrorfilmfestival.com. 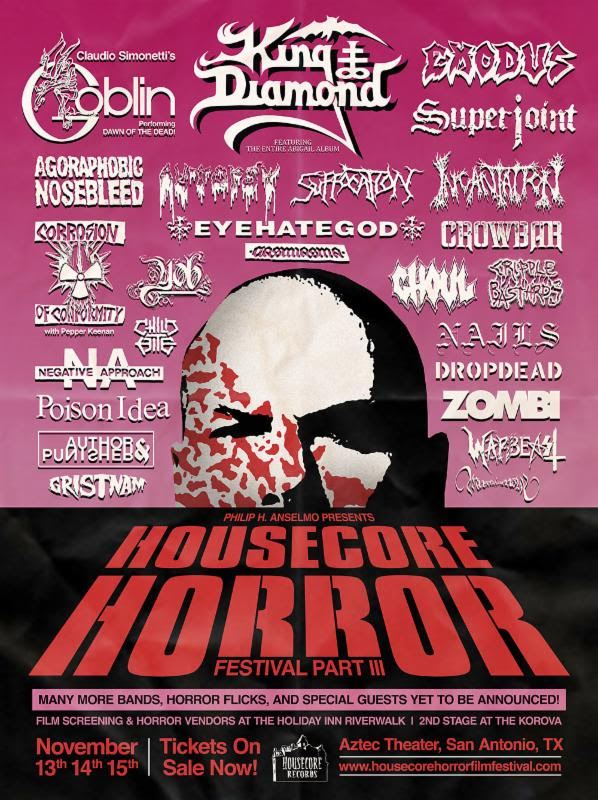