"So the black cat is out of the bag.

August 2008, just before the Ozzfest, Lars Ulrich called me with a very unique suggestion. He was inviting MERCYFUL FATE to be a part of METALLICA's and Activision's Guitar Hero: Metallica videogame. Of course I was immediately interested, it would be such an honor to be part of such a project. Lars requested that we find the original masters for either 'Evil' or 'Curse of the Pharaohs' and gave me a contact person, Scott McDaniel at Activision, to whom we should send these master tapes. I called Hank [Shermann, MERCYFUL FATE guitarist] right away and gave him the interesting news and asked him if he had any idea if the master tapes for the 'Melissa' album might still be at the old studio in Copenhagen or whether that studio might have sent the masters to Roadrunner in Holland way back when. I called Roadrunner New York to ask them if they knew where the masters might be. The big search went so far that Hank went to the old owner of the Danish studio to look through his private cellar since the studio (Easy Sound Recording) had been shut down more than 10 years ago. All searches came back negative.

"Couldn't believe our bad luck. I had to call Scott at Activision with the bad news but when I suggested that we might be able to get most of the original band members to re-record a brand new version of the songs, his response was extremely positive. The only problem was that Activision needed these masters within three weeks, so you can say all hell broke loose.

"Then I went back to Hank with this suggestion and we started trying to figure out how to do this in such short time. Hank said he would give Michael Denner [guitar] and Timi Hansen [bass] a call to see what they would say.

"Since none of us had heard Kim Ruzz play drums since 1985, and running out of time before we had even started, it became too risky to entertain this unknown scenario. We simply had to play it safe. Too much was at risk here. Therefore it was natural to ask Bjarne T. Holm who has actually been the drummer on most of the MERCYFUL FATE albums, including the latest, '9'. Bjarne has kept himself in top form by participating in all kinds of different projects, so we knew he could do it no problem whatsoever. Same scenario goes for Michael Denner, and he got back to me and Hank within a day with a big YES. Regarding Timi Hansen, he supposedly has not played any significant bass for the past 15 years, and has not owned a bass for the past 10 years. BUT, like Michael Denner, he's an absolute natural and when he came back to us with a big YES as well, we knew we had a shot at it.

"Hank made all the arrangements and booked some time for the following week in Earplug Studios in Copenhagen where all the musical tracks would be laid down. Then hardcore rehearsal started, Hank and Bjarne worked on all rhythm at the rehearsal studio, Michael Denner worked at home picking out every single note from his old solos. Timi could only listen at home since he was not in possession of a bass guitar.

"This was the time when I had the second call from Lars inviting me to join METALLICA on stage at Ozzfest for the entire 'Mercyful Fate Medley'. We also invited Hank but he could not attend due to the fact that he would have to be in the studio recording.

"Recording started with rhythm guitars and drums and then it was Timi's turn. Hank told me that Timi had arrived at the studio without a bass and Hank pointed out that the studio had an old Gibson he could try out. Timi grabbed the bass and playing with his special finger-plucking technique, both songs were laid down to tape and perfectly so, only 5 hours later. Like I said, he's an absolute natural. Hadn't lost a beat.

"Next, Hank started working on his solos laying them down note for note like the originals, with very few exceptions. These exceptions were made to enhance the old solos. It sounds so fucking aggressive. Perfect job.

"In comes Michael Denner to recreate all of his original solos. They are all note for note, bend for bend, absolutely identical feel, but with a better sound than back then. Just amazing.

"With all the music in place, and in my mind sounding better and way more brutal than the old recordings, it was my turn. I went in to Nomad Recording Studio here in Dallas, Texas, approximately one week after the Ozzfest and worked with my favorite engineer J.T. Longoria, recreating all of the old vocals.

"It was such a thrill to be back in the studio again. My back didn't allow me to do my preferred six-hour sessions, so we just cut the sessions in half, spending about 3-4 hours every recording day. It was very interesting picking out the various harmony melodies that had been done 25 years earlier and then try to recreate them in the right way.

"Next, J.T. Longoria and I mixed the two songs at Nomad in this quite unique way, which is necessary for a videogame. Meaning, these special stem-mixes where each instrument, drum, cymbal, whatever, each has its own stereo track. Also, we were not allowed to master these songs ourselves. It had to be done by Activision in order to fit all their criteria.

"We got the two songs off to Activision a day before the deadline, and they loved it. They decided to use 'Evil' over 'Curse of the Pharaohs', but I can guarantee you that 'Curse' turned out just as brutal as 'Evil'. 'Evil' was, in the end, a better song for the playability of the game.

"In the meantime, I had been notified by Lars that METALLICA had been given the opportunity to have two animated playable character guests in the game. As it has now been revealed publicly, these two guests are Lemmy and myself. I was asked to fly to California in order to be filmed with these special motion capture suits on, the same way that METALLICA was doing it. Here came the next challenge. My back would not have been able to handle a plane ride at that time, so what now? Scott McDaniel at Activision assured me that this would really not be a problem since their developers have handled these kind of issues before.

"Since the developers were in possession of our latest KING DIAMOND video 'Give Me Your Soul' and had the footage from the Ozzfest, plus a bunch of still photos I sent them, they said they had what they needed to create my animated character. It was amazing to see each stage of the development of this animated King Diamond. Along the road they asked for closeup photos of the rings, the eye necklace, and certain other items I wear on stage, so we got that to them and believe me, ALL THE DETAILS ARE THERE. I've even had the opportunity to see the animated King Diamond actually move with the music, and it's fucking eerie how detailed the developers were able to create me, crossbone mike and all.

"I noticed on various websites that there has been a few questions about the makeup. For a game, this big in stature, you end up having to compromise a little here and there. Upside down crosses on the face was not quite acceptable. Actually, any kind of cross painted on the face might have had a sense of 'blasphemy' to some of all the business partners involved in this big venture. The same goes for the upside down cross necklace.

"Regarding the upside down cross necklace, I think we found a perfect replacement when we exchanged it for 'The Eye' necklace. I would personally have preferred the cross makeup, but I am totally satisfied with what we all came up with.

"All in all, this has been an amazing experience to work with so many talented people, every single one of them just so pro and cool. For my part, I mostly dealt with Scott McDaniel and it's been a pure pleasure.

"Sooooooooo. Hank Shermann, Michael Denner, Timi Hansen, King Diamond and Bjarne T. Holm re-recorded 'Evil' for the Guitar Hero: Metallica videogame, August 2008. This lineup also recorded 'Curse of the Pharaohs' in that same session. We will make both of these songs available to all of you on iTunes. First though, we have to master them. We will start that process shortly. I can't give you an exact date for when they will be available at this point, but it should definitely be before the summer. I can't emphasize enough how fucking amazing they both turned out, but as I said, you will get the chance to judge for yourself in the near future.

"So this was the full story behind what I've described as big news for quite a while, I hope you find these news as encouraging as we, MERCYFUL FATE, do ourselves.

"I'll check around on the Internet and see if I can clarify any questions you might have.

"Major thanks and hail to METALLICA and Activision for letting us be a part of this totally new adventure for us." 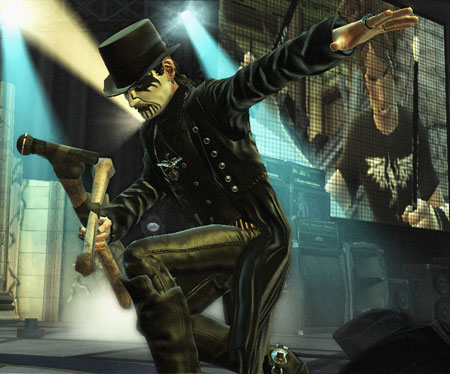 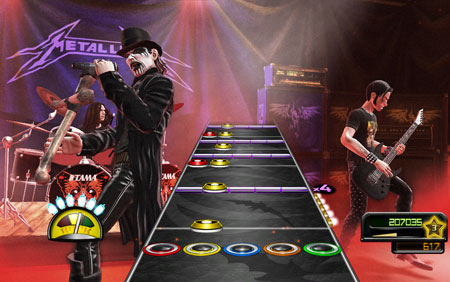