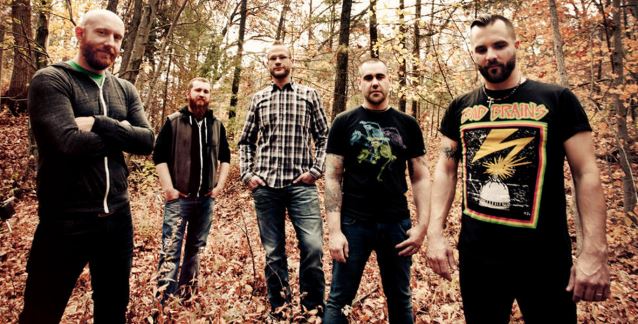 Massachusetts metallers KILLSWITCH ENGAGE are continuing to record their next album for a tentative early 2016 release via Roadrunner Records.

In a new post on the band's Facebook page, KILLSWITCH ENGAGE writes: "It's been a while but have no fear we are making some real progress on the new album!

"If all goes well, we should have this wrapped up early winter late fall!

"So far every song has its own life and style; it's shaping up to be our most diverse record yet!

"Thank you all for your patience. We just want to make sure this record is everything we know it can be! We've put our blood, sweat and more blood into this one. We are stoked for you to hear it!"

KILLSWITCH ENGAGE guitarist Adam Dutkiewicz recently told PureGrainAudio.com about the lyrical themes covered on the band's next album: "Honesty, [there aren't] too many concepts or themes yet. A lot of Jesse's [Leach, vocals] ideas are, again, kind of tying back to hanging on to the positive aspects of life through the negative aspects of life. There's a lot of that thus far. We're not completely, a hundred percent done with the record, so we don't have a lot of things."

Asked how the KILLSWITCH ENGAGE writing and recording process has changed over the years, Adam said: "We don't really change much with what we do, writing- and recording-wise. We still kind of do our own ideas separately, show 'em to each other. If we like 'em, cool. If not, we'll all get together and just kind of tweak the initial ideas, or just throw the song out, either way. And from there, we give all the ideas to Jesse, of course, and he'll come up with his lyric ideas. And then we just go from there. We get into the studio and get some sounds down and start embellishing from there, and the song kind of just grows up."

He continued: "I guess in the fifteen, sixteen years that we've been recording records, it's mostly just computer-based now instead of before. A lot of things were analogue and a lot of things outside of the computer. It's way different. I think it's the reason why a lot of recording studios have gone by the way of the dodo. People end up recording a lot of records on their own, with their own computers and all that stuff nowadays."

Adam added: "I feel like a lot of the metal records nowadays are feeling really, really sterile, because a lot of people aren't even recording drums. They'll just progam 'em, and then just go with that. And that seems crazy to me. That's not the band. If you are a bandmember, wouldn't you wanna be performing on the record? That's a part of you. That's what records are supposed to be. So we'll always be that kind of band, where people are using equipment, playing equipment and recording it. That's the soul of rock and roll, man. That's it."

A KILLSWITCH ENGAGE concert film shot on October 31, 2014 at The Palladium in Worcester, Massachusetts will be included on the band's next DVD release. The performance footage was filmed by the direction team of Ian McFarland and Mike Pecci (FEAR FACTORY, MESHUGGAH) using five Canon C300 cameras outfitted with Zeiss Prime Super Speed Lenses.