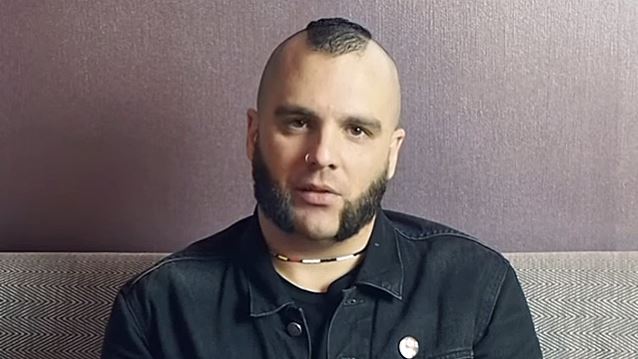 Vocalist Jesse Leach of Massachusetts metallers KILLSWITCH ENGAGE was interviewed on the March 11-13 edition of Full Metal Jackie's nationally syndicated radio show. You can now listen to the chat using the Podbean widget below. A few excerpts follow.

Full Metal Jackie: Jesse, "Disarm The Descent" was your first album back with the band since since 2002. What was different about making "Incarnate" with that last album under your belt?

Jesse: Yeah, it was cool to be part of the demoing process and see how the album was conceived, and also to be the vocalist that they wrote for. "Disarm The Descent" was written mostly instrumentally before I even rejoined, so from the jump on this one, those guys had my voice in mind for writing the songs, and that made it a whole other adventure for me. Yeah, it's like night and day; it's great being there from the ground up.

Full Metal Jackie: Lyrically, you set the bar pretty high for this album and admittedly struggled through the process. Looking back, how did that bit of creative turmoil help you become even better as a songwriter?

Jesse: Yeah, I think, for me, it's a matter of wanting to write music that comes from my soul, wanting to write stuff that I believe in — you know, raw passionate stuff. And I hit a point, while I was writing it, that I just didn't feel like it was coming out the way that I wanted it to. It didn't feel as heavy and as epic as it needed to be. So, yeah, I definitely put myself into a bit of a seclusion to sort of do some soul searching, and the end result, I couldn't be more proud of what I came up with.

Full Metal Jackie: The single and video for the song "Cut Me Loose" is about dealing with the weight of the past. How autobiographical is that song?

Jesse: For better or for worse, it's pretty, pretty… It hits home pretty hard. It's pretty autobiographical, but I think it's something that anyone can relate to. You know, we all have our ghosts of the past; we all have things that we go through and struggle with. I think it's a relevant topic for a lot of people, especially people who listen to metal music.

Full Metal Jackie: How has your sense of self changed since being a kid onstage 15 years ago?

Jesse: That's a great question. I think the number one thing I would say is I found confidence in my abilities — not just as a vocalist, but as a person. And that's led to a humility, if you will, just to be really aware of how fortunate I am to do what I do, and how thankful I am to the fans who support this band, to be able to travel the world. So I think it's a mixed bag of humility and confidence, and trying to find the balance between, you know, humility and… As often many performers are, the insecurities we all have trying to find that balance.

Full Metal Jackie: The New England Hardcore And Metal Festival has become a pretty prominent event. It's also held about an hour from where the band formed. Personally, how much of a big deal is it to headline the second night this year?

Jesse: Oh, it's awesome! That's definitely our stomping grounds. And even before KILLSWITCH, my other bands in the past would play up in Worcester at the Palladium. Just Worcester in general has always been a birthplace of, like, hardcore and metal for all of us growing up in the New England area. So it's and honor, and it just feels like home whenever you get back there and you have the smell of the dressing rooms and the stage and the people who work there. It's kind of like our CBGBs, if you will, for the Northeastern metal scene. It's a great place, and it's an honor.

Full Metal Jackie: It seems like that part of the country, the bands that come out of there, there's a serious camaraderie and the bands seem to take care of each other and nurture the scene.

Jesse: Yeah, I mean, that's what happens when you grow up in the underground. You know, we all… From when we are teenagers through our early twenties, all of us were playing shows together, and back then you didn't rely on big promoters, you didn't rely on record labels. We did it ourselves. So that sort of DIY ethos, that hardcore punk metal ethos, runs through all of us. So to see anyone grab success, you jump behind them and you support them. And you come back from tour and you have local openers open up for you. It's a great thing, it's a community, and I wouldn't be who I am if it wasn't for that, for sure.

Full Metal Jackie: What can you tell us about what to expect and what you have going on beyond this current tour?

Jesse: We are booking stuff all over the world right now getting ready to try to hit as many continents as we can again. But I think the difference this time around for us is we've discussed trying not to let three years pass before we put out a new record, so I think while we're touring, we're gonna be mindful of continuing to write and try to just stay fresh and put out records sooner. But you can bet that we will be on every continent for this tour.