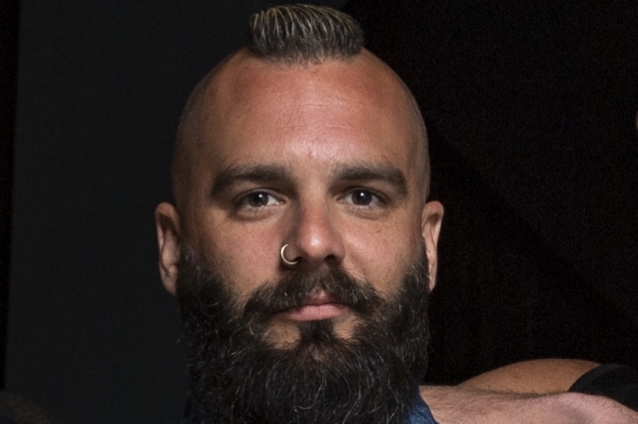 Simon Takla of PBS Metal Genesis recently conducted an interview with frontman Jesse Leach of Massachusetts metallers KILLSWITCH ENGAGE. You can listen to the entire chat via the Soundcloud widget below. A few excerpts follow (transcribed by BLABBERMOUTH.NET).

On whether doing "Alive Or Just Breathing" 15th-anniversary shows last year validated his 2012 return to the band:

Jesse: "I think there's been many moments that have reminded me how fortunate I am to be back in the band, but for sure, that record especially, people still look back upon it and see it as a benchmark record for us. We're really honored by that. I didn't get to tour on that first album cycle, so it was great to come back and play the whole thing from start to finish."

On whether KILLSWITCH ENGAGE is currently in the process of cutting down the 21 songs they have written for their next studio album which is due in 2019:

Jesse: "We're going to cut it down and figure out what we're going to do with the extra songs, just have them in our back pocket. We just want to make the best record we can and figured why not write a bunch of songs and choose the best songs out of that so the album is best it can be."

On how KILLSWITCH keeps things fresh in the studio with a core musical lineup that has been together for several years:

Jesse: "Everybody puts pressure on themselves, first and foremost, to try to stretch and come up with something new. That's the beauty of this band; everybody gives it all that they got. We do it to each other, everybody pushes each other. It's great because it doesn't feel like it's old hat or routine. It doesn't feel like anyone is bitter and jaded and annoyed, which tends to happen in a career. Everyone is trying to push the band and put out the best music they can after all of these years."

On the personality differences between him and guitarist/producer Adam Dutkiewicz:

Jesse: "Adam is a highly trained, intelligent musician who reads music and understands the language of music. I'm a punk rocker. Some of my favorite bands play three chords and really don't sing much at all, so I come in with passion, energy, chaos and I don't read music and I don't know if a note is correct or not. I'm just coming in, singing from my gut. I think when we converge and come together, [we] complement each other. He polishes my dark edges and helps me to see how the song could be better if we do it this way because of music theory. Then I'm able to tell him, 'Loosen up a little bit. It doesn't have to be perfect. Maybe this part should be more imperfect so people can feel it.' It's a nice little balance we have, and I think it works well."

Jesse: "I think that's actually a really good point because he's definitely rooted in punk and hardcore as well and I think that is the aspect that comes out live, his total dis-concern for how we're supposed to act in a metal band. That's his sort of middle finger to everybody, to all the people who act very tough and think metal has to be doom and gloom and trying to be a cool or tough guy, that's his punk rock way. That's a really good way of putting it. That's his way of twisting it, so that character definitely comes out live."

On whether it was difficult for KILLSWITCH to win fans of IRON MAIDEN during their recent support slot for the British metal legends:

Jesse: "Yeah, it is a lot of work, for sure. But I think it's good for a band like us to sort of realize that there's still so many more people to win over. There were nights that were tougher than others for sure, but I think toward the end of the set, we do win over the fans that weren't sure. MAIDEN's audience is really old school, so from the moment I step onstage and start screaming, you can see people's faces, like, 'Here we go. I have to sit through this.' Thankfully, we had won audiences over. The majority of the shows, we held our own. We did well."

On whether he thinks the term "metalcore" is now more accepted and its bands are now considered to be just "metal":

Jesse: "I never liked the term 'metalcore.' I don't think it's an accurate representation of the wide variety of bands that get lumped under that category. But I get it. People have to categorize stuff and put it into their own little category so they can describe stuff to somebody else. I like to say we're more of a metal band. It is what it is. People are going to use that term whether I like it or not."

On teaming up with former KILLSWITCH vocalist Howard Jones for a duet on the band's forthcoming studio album:

Jesse: "It was fun. I didn't have a ton of time, so he came in and sang what I wrote, but I did write the song with him in mind, even before I mentioned that I'd like for him to sing on it. It was really cool to stand outside of the studio room because it was a small room he sang in and listen to him belt out the choruses and sing that verse. I was getting chills. It was great. Since that experience, we've been really good friends and close friends. We text each other a lot on the phone. It's awesome to see where he's at right now with his new band, LIGHT THE TORCH. I'm super proud of him and he's overcome a lot of obstacles. What an incredible vocalist."

KILLSWITCH ENGAGE's next disc will be released via Metal Blade Records in the U.S. and Sony Music Entertainment in the rest of the world.