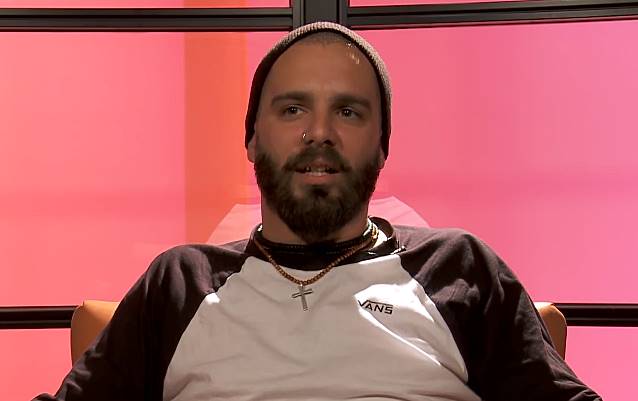 KILLSWITCH ENGAGE singer Jesse Leach has defended his recent cover of the MAZZY STAR song "Fade Into You" with his solo side project ALIKEN, explaining that he is simply "being an artist" and "being true to who [he is]."

Leach recently shot a video for his version of the 1994 alternative rock/dream pop classic, featuring the vocalist standing on a lakeside and walking through a wooded area while singing the song.

Speaking to Tina Smash of the Jacksonville, North Carolina radio station Rock 105.5 at last weekend's Knotfest in Devore, California, Leach stated about his decision to cover the MAZZY STAR track: "That's one of my favorite songs on the planet. I'm a big sucker for that '90s sort of alternative, gothy… Like COCTEAU TWINS, THE SUNDAYS… I grew up dating a punk-rock chick and she made me a mixed tape of all those groups on it, and I have a soft spot for it. [I thought it would] be fun — just to mix it up and do something different with it. You know what I mean. So [there's] more of that to come. But not just reggae. Like, I'm gonna do rock and roll, I'm do some punk stuff. I've got a MINOR THREAT cover coming out soon on a seven-inch compilation. I just don't wanna be boxed in. So my solo stuff is gonna be anything but metal, anything but aggressive."

Asked if the KILLSWITCH ENGAGE fans have embraced side more experimental, melodic side, Leach said: "Some do, some don't. I get hate mail, but, like… good. If I'm pissing somebody off, good. 'Cause I'm being an artist, I'm being true to who I am. And if you don't like it, I don't care.I don’t' care. Honestly."

"Disarm The Descent" is KILLSWITCH ENGAGE's first album with Leach at the vocal helm since 2002's now-classic, genre-defining "Alive or Just Breathing".