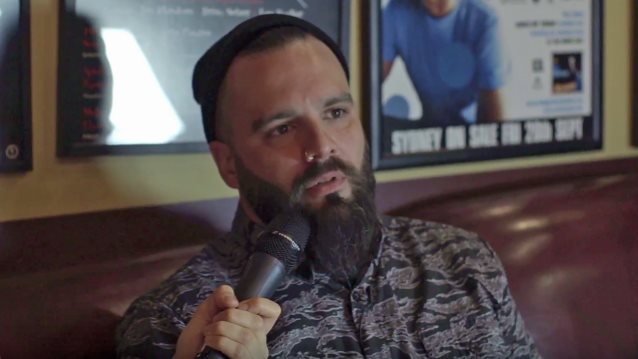 On March 3, host Christina Rowatt of "The Void" conducted an interview with KILLSWITCH ENGAGE singer Jesse Leach backstage at the Enmore Theatre in Sydney, Australia during the band's 2017 "Alive Or Just Breathing" 15th-anniversary tour. You can now watch the chat below.

Speaking about the current hysteria in the United States about immigration — stoked by exaggerated fears of crime and economic illiteracy — Leach said: "It's fear mongering — that's what governments are supposed to do. Not to get super, super deep, but I call bullshit on all of it. I call bullshit on what's going on right now in our country. It's just stirring people up and dividing them, and if people are divided, they're easier to control."

Leach went on to say that discrimination based on sex, race, religion, national origin, disability or familial status has no place in our lives, our government and our society. "The more I've traveled and the more people I've met, the more I realize we're all pretty similar," he said. "And, to me, racism, for example, is laughable. It's so pathetic that people still… They're always gonna think that way; that's always gonna be the case. That's why, for me, writing songs that approach that, like 'Hate By Design' is basically about exactly that. When things started to happen in our country, to me, it was, like, 'No, it's more than that.' That's why the word 'design,' I thought it was just a good word to use, because there are people who are sitting there trying to figure out how to make certain things work to a certain agenda, so when people hate each other, it's a polarizing thing."

KILLSWITCH ENGAGE and ANTHRAX will hit the road this spring to co-headline a 27-date North American tour, presented by SiriusXM. The bands' itinerary will also include an April 15 appearance at the Texas Independence Festival in Austin, as well as each band headlining two solo shows separate from the double bill.