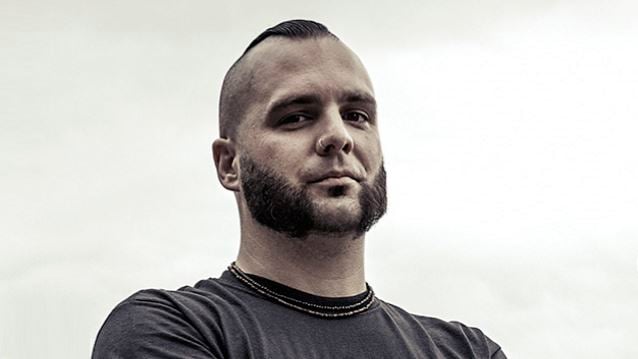 Leach announced the project's formation on Instagram, writing: "It's been a long time coming, man! Woke up with a fire in my heart!

"These four albums — MINOR THREAT's 'Minor Threat', 7 SECONDS' 'Walk Together, Rock Together', BLACK FLAG's 'Damaged' and DISCHARGE's 'Hear Nothing See Nothing Say Nothing' — serve as inspiration for a jam session today with three killer humans! Don't tell anyone, but I've put together a punk hardcore band/project for fun and today is our first jam session here in New York! To say I'm excited is a vast understatement!"

He added: "This is a side project and it is being done for the pure enjoyment of playing. It is also a necessary outlet for a singing/yelling style and lyrics I can't fit into any other band or project I've ever done. My 15-year-old self is quite proud of me! GO!!"

In a 2013 interview with Noisecreep, Leach spoke about his love of early punk and hardcore. He said: "My brother got me into METALLICA. The first time I heard 'Blackened', it blew my mind, but it wasn't something that 100% spoke to me. I was looking for something else. That happened when I was hanging out with my friends in high school and they knew I was into METALLICA, NIRVANA and PEARL JAM and they asked me: 'Hey, have you ever heard this band MINOR THREAT? Or this band BLACK FLAG?' I remember hearing MINOR THREAT for the first time. I think the song was 'Seeing Red' and my mind was blown. I didn't understand what I was hearing. It was raw and pissed off. To this day, Ian Mackaye's voice is my favorite voice in hardcore. It just sounds so angry and the guitars sounded like that as well. I had never heard anything like before and I was hooked. I went right out and bought the MINOR THREAT discography CD that was out then: it was '92 or '93. From there I went into all different kinds of hardcore. BAD BRAINS, EARTH CRISIS, YOUTH OF TODAY, CRO-MAGS. That led me back into punk because I wanted to know where this music came from.

Regarding his pre-KILLSWITCH ENGAGE bands, Jesse said: "Interestingly enough, my first band was more a mixture of hardcore and rock. But vocally, I became more of a metal and hardcore vocalist because I always ended up playing with people who were already influenced by bands like INTEGRITY and DEADGUY; bands that played a mixture of styles. Even though I fell in love with hardcore and punk, I was always a vocalist who did a mixture of things — singing, screaming, yelling — the kind of vocals they now call 'metalcore.'"

KILLSWITCH ENGAGE and ANTHRAX will hit the road this spring to co-headline a 27-date North American tour, presented by SiriusXM. The bands' itinerary will also include an April 15 appearance at the Texas Independence Festival in Austin, as well as each band headlining two solo shows separate from the double bill.

It's been a long time coming man! Woke up with a fire in my heart! These 4 albums serve as inspiration for a jam session today with 3 killer humans! Don't tell anyone ?but I've put together a punk hardcore band/project for fun and today is our first jam session here in NY! To say I'm excited is a vast understatement! Now I just need to hack my car out of a couple of feet of ice! Stay tuned, you know I gotta big mouth on here and I'll drop details or a sample track as soon as I have them. This is a side project and it is being done for the pure enjoyment of playing. It is also a necessary outlet for a singing/yelling style and lyrics I can't fit into any other band or project I've ever done. My 15 year old self is quite proud of me! GO!!!!!!! ✊?☠️ . #HardcorePride #UpThePunx #ProtestMusic #Friends #Passion #PMA #Hardcore #Punk #Bands #MinorThreat #7Seconds #BlackFlag #discharge #JesseLeach #FedUp #SpeakOut #Anarchy #Stoked #FightBack #TheWeapon