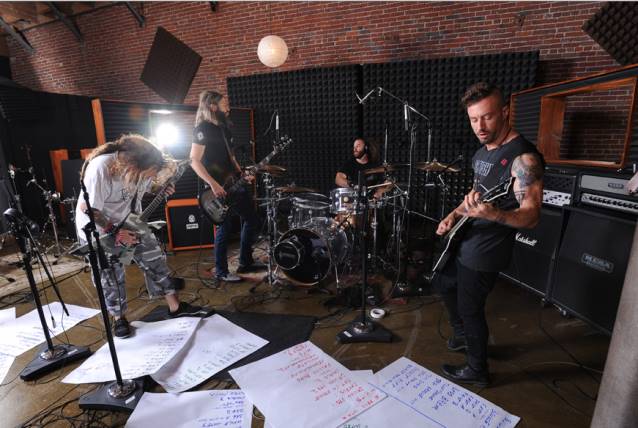 KILLER BE KILLED has aligned with Nuclear Blast Entertainment to release the group's debut record in 2014. The mystique-fogged collection is the result of writing sessions, creative and philosophical conversations and an eventual studio lockdown in Los Angeles. All of this has been heretofore hidden from the public, save for interview tidbits that relentlessly drove the heavy music community's anticipation to a fever pitch.

KILLER BE KILLED is comprised of guitarists Max Cavalera and Greg Puciato, bassist Troy Sanders — all of whom share vocal duties — together with drummer David Elitch. The album was produced/mixed by Josh Wilbur (LAMB OF GOD, GOJIRA, STEVE EARLE).

"It's a bit of SABBATH-y doom, a bit of thrash, a bit of hardcore and punk," Puciato explains, searching for the right words to describe something defiantly unique.

"This is a very special project. It's a one of a kind thing, with a lot of potential," asserts Cavalera. "The album is a mix of heavy, fast and melodic songs."

Featuring lead vocal contributions and lyrics from Puciato, Cavalera and Sanders, the aggressive assemblage of songs run the gamut from crowd-inciting brutality and jagged basement show style carnage to melodic, off-kilter hooks. Sanders jokingly described the band as "a perfect blend of a legend, a freak, a beast and a wookie."

It's all delivered through a prism of metal history conjuring the raw aggression of SEPULTURA's earliest rumblings, together with the progressively esoteric shamanistic approach of MASTODON and just a hint of the dissonance of THE DILLINGER ESCAPE PLAN. It's a set of songs with more traditional structure than most of them are known to perform, with a drum performance from a master of precision, power and groove.

"I love the idea of Greg, Troy and I singing together, with David Elitch's amazing drumming," says Cavalera. "Being a part of this is something quite different for me."

"There would be no point in doing this if it sounded the same as our other bands," notes Puciato. "Of any of our bands, it sounds the furthest away from mine, mainly because DILLINGER is [guitarist/founder] Ben [Weinman]'s expression, musically."

KILLER BE KILLED is the latest signing for Nuclear Blast Entertainment, the joint venture between Nuclear Blast Records founder Markus Staiger and massively influential ex-Roadrunner Records senior VP of A&R Monte Conner, who has worked with Max Cavalera on 18 records, starting with 1989's "Beneath The Remains".

The debut album from KILLER BE KILLED is set for release in 2014.