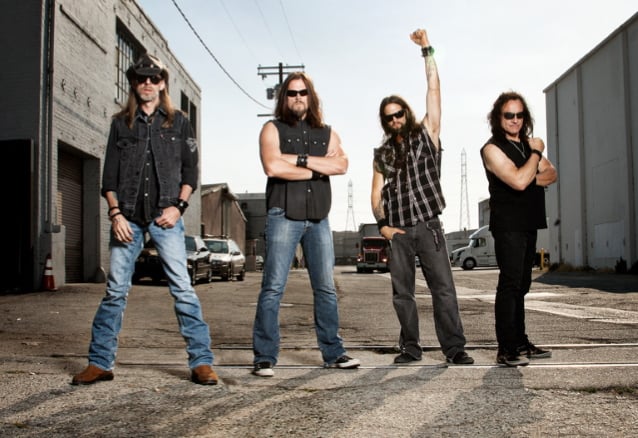 On the latest episode of the "J-Bunny's Music Hub" podcast, KILL DEVIL HILL guitarist Mark Zavon replied to Vinny Appice's assertion that the legendary drummer quit the band because the other members of the group couldn't get to rehearsals and live shows on time.

Shortly after he left KILL DEVIL HILL in early 2014, Vinny said that the band's inability to gain significant traction with its music was a major factor in his decision. However, more recently, Vinny has suggested that he exited the group because he "couldn't deal with" the fact that some of his bandmates were consistently tardy for KILL DEVIL HILL activities by an hour and a half or even longer.

Asked to respond to Appice's latest comments and address the fact that the drummer's explanation for why he left the band appears to have evolved over time, Mark told "J-Bunny's Music Hub": "Well, both [of his stated reasons] are true. And he's right. And there was [tardiness]. Dewey [Bragg], our singer, at the time, was kind of going through some hard times and some personal difficulties, and he did have a hard time showing up sometimes. And even when we were on tour, he was — I don't know, man — just having a little bit of trouble. He's a totally changed man now, and now he's the first guy, anywhere we go, he's the one telling us, 'Hey, man, we're gonna be late for soundcheck.' But in those days, yeah, it was a little harder to wrangle him. So Vinny was right. And Vinny, he doesn't really put up with that. He's a name guy — he's got a history and a reputation. He's a pro. He's a star. So you can't blame the guy for that. I certainly didn't. I was the first one there [for rehearsals and live shows], 'cause I was stoked to play with those guys. Are you kidding me? Vinny Appice and Rex Brown in a room, and I get to play guitar?"

He continued: "So, anyway, I wish it could have kept going, but sometimes things don't work out, and everything happens for a reason. So I try not to question it. We've got great guys in the band now, and everything happens for a reason. So I'm looking forward to putting out this new record and people hearing what we can do without those guys in the band."

Vinny, who had previously played with BLACK SABBATH, DIO and HEAVEN & HELL, left KILL DEVIL HILL in March 2014. He has since been replaced by Johnny Kelly (DANZIG, TYPE O NEGATIVE).

Back in 2019, Zavon confirmed that KILL DEVIL HILL had recruited Nico D'Arnese to play bass following the departure of Brown.