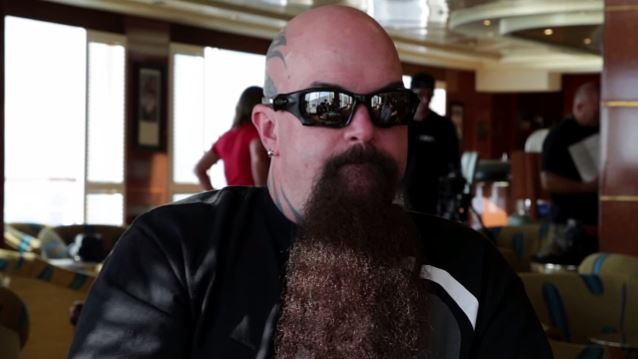 Sami Jarroush of the Rock It Out! Blog and Consequence Of Sound conducted an interview with SLAYER guitarist Kerry King during this year's edition of MOTÖRHEAD's Motörboat cruise. You can now watch the chat below. A couple of excerpts follow (transcribed by BLABBERMOUTH.NET).

On why SLAYER fans are so dedicated and loyal:

"I don't know, man… I think it's just the intense brotherhood kind of thing. I think SLAYER's crossed another boundary and it's a lifestyle now; it's not just music and fans. It's, like, the entire community. It's just you live SLAYER and the show is an event. It seems like, to me, I think the fans realize we're just like them. We just got together with four dudes that make music that's rad."

On whether he has heard any new bands that impress him:

"There hasn't been a whole lot for me to get excited about since SLAYER, MEGADETH, METALLICA, EXODUS, ANTHRAX… you know, that era. There was a big push from Scandinavia a while back — like IN FLAMES, ARCH ENEMY, THE HAUNTED… CHILDREN OF BODOM… To me, that was the last movement that really did something. Yeah, there's bands coming out, but I haven't seen anybody that just blows me away."

SLAYER's new album, "Repentless", debuted at No. 4 on The Billboard 200, having shifted 50,000 equivalent album units in the week ending September 17.