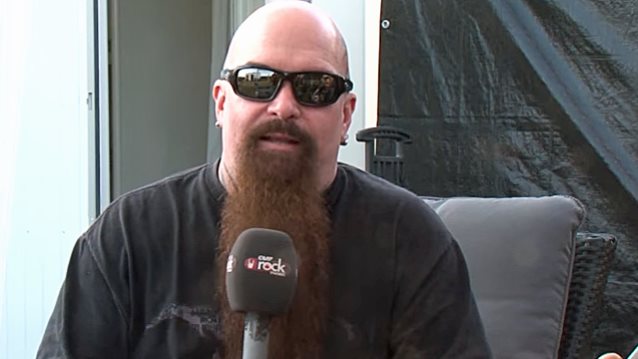 Germany's EMP Rock Invasion recently conducted an interview with SLAYER guitarist Kerry King. You can now watch the chat below.

Asked about SLAYER frontman Tom Araya's recent hints that he may be ready to retire in the not-too-distant future, King said: "He's very unclear. That's just how he is. I don't know if he likes holding his cards in his pocket or what."

He continued: "I mean, I don't have an answer. I'm holding off a lot of things I wanna do at home, just 'cause I don't know if I'm gonna be working in two years. I'm gonna be working, hopefully in SLAYER. Yeah, dude. What else am I gonna do? I came out of high school and fucking went on tour. [Laughs]"

Pressed about whether there is any end in sight for SLAYER, King said: "Not for me. Not for me, man — especially on such a good record [last year's 'Repentless']."

When the interviewer said that he is looking forward to another 35 years of SLAYER, Kerry said: "Well, I don't know about that. I'll take another record or two."

Araya talked about his possible retirement in an interview with Loudwire earlier in the year. He said: "At 35 years, it's time to collect my pension. [Laughs] This is a career move."

He continued: "I'm grateful that we've been around for 35 years; that's a really long time. So, yeah, to me, it is. Because when we started off, everything was great, because you're young and invincible. And then there came a time where I became a family man, and I had a tough time flying back and forth. And now, at this stage, at the level we're at now, I can do that; I can fly home when I want to, on days off, and spend some time with my family, which is something I wasn't able to do when [my kids] were growing up. Now they're both older and mature. So now I take advantage of that."

Araya added: "Yeah, it just gets harder and harder to come back out on the road. 35 years is a long time."

Tom went on to say that he doesn't know if there will be a follow-up album to "Repentless", explaining that it was "too early to tell."

As previously reported, SLAYER will join forces with special guests ANTHRAX and DEATH ANGEL this fall for a seven-week North American tour. The dates start in Cleveland on September 9 and will hit both major and secondary markets across the continent.