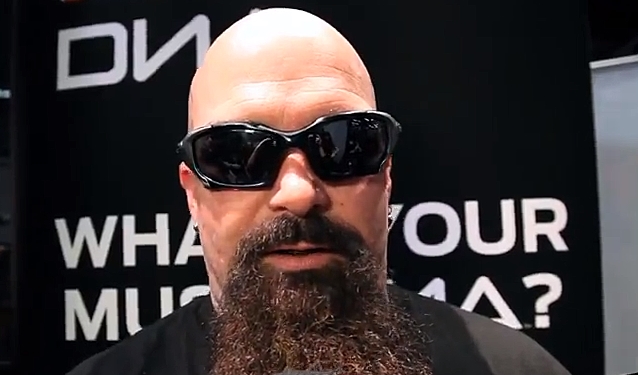 SLAYER guitarist Kerry King was interviewed on the November 1-3 edition of Full Metal Jackie's nationally syndicated radio show. You can now listen to the chat using the audio player below. A transcript of the question-and-answer session follows.

Full Metal Jackie: SLAYER, of course, has the North American headlining tour [coming up at the end of October], the band's first in two years. It runs through the end of November. You guys have been touring all summer [in Europe] with Paul [Bostaph, drums] and, of course, Gary Holt [guitar, also of EXODUS]. At what point over the last five months did you know that this lineup of the band was ready to go into the studio, or work on new music?

King: Well, realistically, as soon as Paul got with us, I started teaching him new stuff, because I've got probably thirteen, fourteen songs [written for the next record]. So when we didn't have any touring schedule that we had to learn stuff for, I was, like, "Well, let's take this time to get your and my chops up together to work on this new stuff so when the time comes, we'll already have 90 percent of the work under our belt."

Full Metal Jackie: Kerry, metal fans around the world were terribly saddened by the death of Jeff Hanneman. Will his style and what he brought to the band continue to influence SLAYER's legacy even after he's gone?

King: I think so, because, I mean, when you play guitar opposite somebody — Jeff with myself or myself with Jeff — I think our styles infused a bit. I think in some of the things I write, I think people are gonna say, "Wow, that sounds like Jeff would have wrote it," and stuff he would have wrote, had he written anymore, people would have said, "Man, that sounds like something Kerry wrote." But, you know, we've been together so long that we kind of infused ourselves into each other. So I think it's going to be business as usual going forward, [but] just one member less, which sucks for everybody.

Full Metal Jackie: This is the first full-blown SLAYER headline tour in quite a few years. What are you looking forward to the most about it?

King: Yeah, this is the first one in at least six or seven years. Every time we've come through the States, it's either been on [Rockstar Energy Drink] Mayhem [Festival] or on SLAYER / [MARILYN] MANSON tours or SLAYER / MEGADETH tours, so we might have maxed out [with our time on stage] at an hour and five [minutes], an hour and ten [minutes], but on this one, we get to play an hour and thirty [minutes], an hour and thirty-five [minutes], which we haven't been able to do in the States in a very long time. I enjoy doing full headline sets, because if you're the actual last person playing, most people spent their money to come see you. So I wanna be able to give them something they're gona remember for the first time in quite a while.

Full Metal Jackie: What can we expect from the setlist from the rest of the tour? Will you be debuting any new music prior to releasing it?

King: No new music. I think it's far better that people know our music before they come to see it, because it's either so intricate or so fast that you can't really wrap your head around it. It's just not conducive to good fan-band experience. I mean, I know there's YouTube and [performance footage of any new music] would be up the day after we play it, but I also believe that people should have the recorded version, where everything sounds how you want it to sound, and then when they see it live, they know what to expect.

Full Metal Jackie: I've got to say, I agree with you when it comes to hearing new music for the first time. I don't know if live is the best way to hear it first. I like to get to know the music first before I see it the live setting.

Full Metal Jackie: Going back to the summer, I know you guys did a lot of touring overseas these last few months. That first show without Jeff after he passed must have been hard.

King: It's hard. It would have been a lot harder if it was with somebody we hadn't played with. Gary's been with us for two and a half years, so it was as easy for us as I think it could have been. In the face of tragedy, let alone adversity. I mean, you're in the face of tragedy. We're gonna have to deal with that for the foreseeable future, if not the rest of time — as long as there's a band. To lose somebody and still be a prominent band and still move forward is kind of unheard of. People leave bands and people move on and do something else, but to have somebody that's been a songwriting member of your band for the better part of thirty years, and he's not there anymore, that's a little bit different. I'm sure we're gonna be learning how to deal with it for a couple of years to come.

Full Metal Jackie: Did you ever question the future of the band?

King: I haven't. I'm one of the people that was always of the opinion that if me or Tom [Araya, bass/vocals] or Jeff wasn't in the band, then it probably shouldn't be [called] SLAYER. But I was always thinking if somebody quit rather than if somebody died. It's a little different for me, because now, I've got my songwriting partner taken away from me; it's not like he left. And I'm still in a place where I've gotta work. And I don't want a new job; I like my job. [laughs]

Full Metal Jackie: We touched on working on some new music. Anything you can tell us about a timeline or what we can expect or when?

King: My personal timeline, which never makes any sense, is to go in and start [recording the new album] in January; that's what I'm hoping to accomplish. Paul and myself have worked on stuff to the point where so much of it is 80-90 percent polished. We're looking to be so well schooled in the new music that when we actually do go in, hopefully it takes less time to record. But that being said, we're looking at January. Hopefully having a quick recording cycle, because I've already got seven songs done lyrically, which is unheard of for me. So hopefully it makes everything go quicker. I would love to have a record out in May. Before all the summer [festivals], be it in Europe or U.S., whatever.