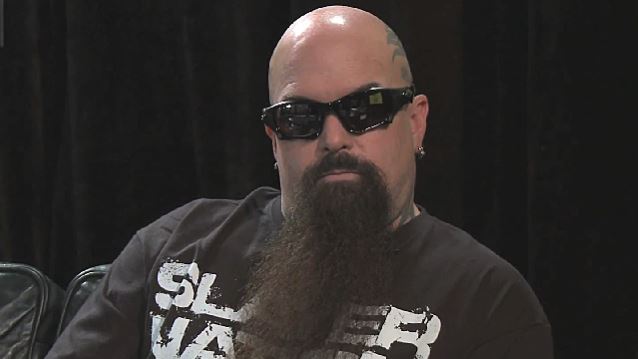 SLAYER guitarist Kerry King says that fans will "dig" the band's next album because it contains much of the same type of material that SLAYER has covered on its previous efforts.

SLAYER's new CD is being produced by Terry Date, who previously worked with the band on the song "Implode", which was made available as a free download as a "thank you" to the band's fans for their continued support following SLAYER's surprise performance at this past April's Revolver Golden Gods awards in Los Angeles.

During an appearance on Scion AV's "The All Purpose Show", King stated about the band's upcoming CD: "By the time this record comes out, it's gonna be six years, almost, since the last one. So you can only beat the old the old material so much, you know, and then you've gotta have some new stuff to infuse in there. It's fun to do that too, though. It's fun to have new material you can play because, you know, at some point you get tired of playing certain songs. But we played 'Raining Blood', 'Angel Of Death', almost every show since '86, so… That goes both ways. There's some [songs] that you're just gonna play 'till you stop playing, and there's some you're, like, 'I'm ready to take four years off on this one.' So we'll have 10-12 new ones to play for everybody next year."

Asked if there is any pressure on SLAYER to come up with a worthy follow-up to 2009's "World Painted Blood", King said: "I think there's more talk about pressure than anything. I mean, I've been making up this music for 30 years — not by myself, but I've been making it up for 30 years. So I think it's business as usual, pretty much. We've got fast material, we've got heavy material, we've got spooky material… So anything you dug about SLAYER historically, you should dig about this record."