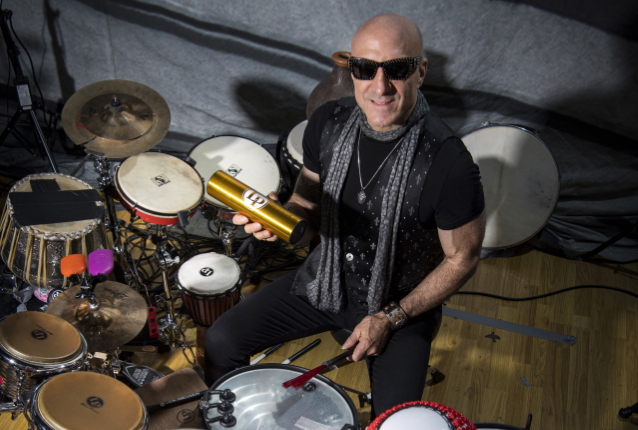 Latin Percussion (LP) has announced that Kenny Aronoff has joined its percussive family.

One of the most influential session and live drummers in the world, Kenny has worked with a list of artists that reads like a who's who of rock royalty: THE ROLLING STONES, Bruce Springsteen, Paul McCartney, Sting, Elton John, Eric Clapton, Mellencamp, SMASHING PUMPKINS, Johnny Cash, Stevie Wonder and Lady Gaga and more. He has recorded on over three hundred million records sold and is currently working with John Fogerty, Joe Satriani and SUPERSONIC BLUES MACHINE, while maintaining his busy session schedule. Modern Drummer named him the number one pop / rock drummer and number one studio drummer for five consecutive years and Rolling Stone magazine named him top 100 greatest drummers of all time. His unique, versatile style, a combination of power and finesse, has seen him contribute to over 60 Grammy-nominated or awarded recordings over the last four decades.

LP's extensive range of percussion instruments can add a multitude of tones, textures, sonic options and effects. Always looking for new and interesting sounds, Aronoff started with a set of Pedrito Martinez Signature Deep Cut Mango Bongos, Conga and Tumba to give him an incredibly bold, warm Latin voice. He's also been exploring world sounds with the clay LP Udu Drum Utar and the hard wood LP World Beat 18" Tunable Bodhran with a natural goat skin head. From the LP RAW range, Aronoff picked the 6" and 8" Potz, Trash Snare and the Sound Enhancer's to add new variations to his drum kit. Of course, a hand-picked selection of tambourines, shakers and accessories will further expand his range of tonal options and textures.

Aronoff said: "The bottom line is it has to be authentic. I like to experiment and combine different instruments, I use everything, cajon, udu drums, different size tambourines, bongos, congas. I am honored by LP's warm welcome."

Jerry Zacarias, LP artist relations, said: "All of us at LP are honored to have the opportunity to work with Kenny. He's been a 'first-call' drummer for decades and he continues to perform and record with some of the most notable names in the business. He's an innovator, motivator and creative force. We're incredibly proud to welcome him to the LP family!"

Founded in 1964, Latin Percussion (LP) is the largest hand percussion instrument brand in the world.