G.P. Putnam's Sons has set an April 25 release date for "There Is No F*cking Secret: Letters From a Badass Bitch", the new memoir from Ozzy Osbourne's daughter Kelly.

In the book, the 32-year-old TV personality shares stories through a series of letters detailing everything from her mom Sharon's cancer to "The View" racism scandal.

"The book isn't just a memoir," Kelly told The Wrap. "They're letters to the people, places, situations, circumstances, things I've been through, to make me who I am, so people stop asking me what my secret is, and hopefully with me going through what I went through in my life and sharing what I've learned can help other people. It's okay to be different."

Kelly also talked about the racist comment she made about the Latino community on "The View" in 2015 when she was trying to make a point about then-presidential hopeful Donald Trump and she asked: "If you kick every Latino out of this country, then who is going to be cleaning your toilet, Donald Trump?"

"I'm a little bit scared about what people are going to say," Kelly told EW. "And I do address the whole 'View' issue, and how that has affected my life forever. I still hate myself for it, because if it was me, watching someone else say it on television, I'd hate them. But the fact is, I got cut off. No matter what I was going to say, people are not going to believe it anyway. I know my true intentions behind it, but like I say in my book, the mistake I made was to fall back on witty sarcasm, and you can't do that when you're talking about race, especially in this country. In my way of trying to defend a community of people that I do truly love, I managed to insult an entire race of people in this country. The fact that if you type in 'Kelly Osbourne' [into Google], the first thing that comes up is 'racist' just kills me."

Official "There Is No F*cking Secret: Letters From a Badass Bitch" book description: "Kelly Osbourne may not always have been a typical role model, but no one can say that her perspective isn't hard won after spending three decades in the spotlight: from growing up completely exposed to the heavy metal scene — replete with crazy antics most readers have only begun to hear about — to spending her teenage years as the wild middle child of an even wilder Ozzy Osbourne, to the family's popular stint on their wacky eponymous reality show. Since then, Osbourne has forged her own path as a style icon and powerful woman in the media who isn't afraid to tell it like it is and be honest with her fans. But being the daughter of a music legend hasn't always been glamorous; growing up Osbourne is an experience that Kelly wouldn't trade, but there are battle scars, and she is finally now ready to embrace and reveal their origins.

"Told as a series of letters to various people and places in her life, 'There Is No F*cking Secret' gives readers an intimate look at the stories and influences that have shaped Osbourne's highly speculated-about life, for better or for worse. The stories will make readers' jaws drop, but ultimately, they will come away empowered to forge their own path to confidence, no matter how deranged and out of control it may be, and to learn the ultimate lesson: that there just is no f*cking secret." 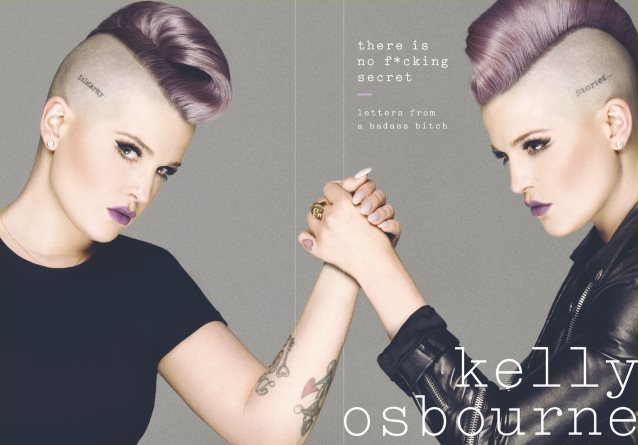