Bring Back Glam! recently conducted an interview with vocalist Ron Keel of the reactivated '80s hard rock band KEEL. An excerpt from the chat follows below.

Bring Back Glam!: Tell me how the reunion got rolling.

Ron Keel: The band members always remained really good friends, unlike so many other bands of the same genre. We always stayed in touch. Every year, I'd get together with the guys and we'd talk about how cool it would be to do a reunion. Unlike most of our contemporaries, KEEL hasn't been playing regularly. Even though the band is named after my last name and I had every right and ability to form a new version and keep going, I didn't feel it was right without the original guys. I always thought of KEEL as a band in every sense of the word. There's a real camaraderie and brotherhood in the true sense of the word with all the guys and I'm really glad I held out. So, we've always talked about it and the last couple of years, things have changed in the industry to make this possible. Festivals are a big thing. Most bands — even ones with platinum records — were playing small clubs for 200 or 300 people and now with the festivals the last couple of years you can get out there and do it right. You can get on the big stage, play in front of thousands with a big production and do it right. That was certainly a large part of making this happen. Having a great time behind us and with us is also a big factor. We were determined we wouldn't do this unless we could do it right and the timing makes it a milestone: 25 years since the release of the "Right to Rock" album and 20 years since the band has played on stage together. This just seems like the right time to get out there, celebrate the music, great times, friendships and play for people that want to hear it.

Bring Back Glam!: So, what really caused the KEEL break-up?

Ron Keel: The truth is, after several albums and not getting over the hump — we had a lot of success, we toured the world, sold a lot of records, were on the covers of magazines — but we never achieved the level of success of bands like MÖTLEY CRÜE and RATT. After three records, people started pointing fingers and demanded, "Why isn't it happening for us?" Well, it's a lot of things: it's the record company, the choice of single, the difficulty of getting on a big tour. That's what I attribute to the difficulty of getting over the hump. We had a short time with BON JOVI. This was great, it was the last leg of the "Slippery When Wet" tour. CINDERELLA had 300-some dates, we had 20-some dates. We were scheduled to tour with METALLICA when the bus accident happened and Cliff Burton died and that tour was cancelled. There were other factors that lead to us never being on a big tour for a long length of time. A lot of bands were not receptive to taking us on the road for them. BON JOVI did. We opened for VAN HALEN at the Texas Jamm and also for AEROSMITH at their big reunion show when Brad Whitford and Joe Perry rejoined the band in Massachusetts — big stadium show. You start to wonder what is going wrong and you second guess yourself and you begin to have differences. [Guitarist] Marc Ferrari left to form his own band COLD SWEAT and KEEL just wasn't the same after that. Bryan left the band...it sort of feel apart. I could have plugged in new players and kept going but I just didn't feel it was right. So, we never really "broke up" — more like one piece of the puzzle fell away and it was never the same again. I'm glad I pulled the plug at the time and didn't beat a dead horse.

Read the entire interview from Bring Back Glam! 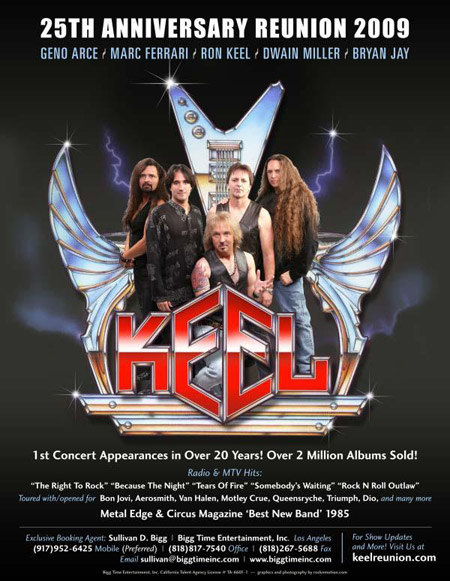