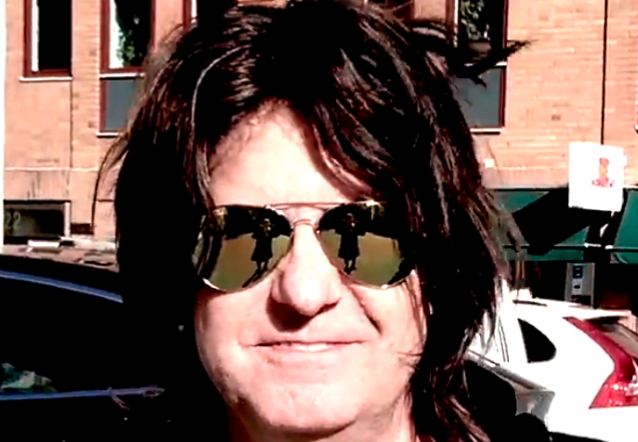 VAN HALEN scored its first number one single in 1984 with "Jump", which featured Eddie playing the synthesizer, a move which was seen as controversial among fans because Eddie was best known for his dazzling guitar solos. According to Billboard, the track debuted at No. 47 on the Hot 100 chart in January 1984 and reached No. 1 just six weeks later, an unusually quick ascent for the time, holding at the top spot for five weeks.

Marcello spoke about Eddie's influence during an appearance on the Van Halen tribute episode of "80's Glam Metalcast". He said (hear audio below): "[Eddie] introduced keyboards into metal, which was almost not allowed at the time. I remember I saw 'Monsters Of Rock' in Stockholm. It was VAN HALEN, AC/DC and MÖTLEY CRÜE. And when they played 'Jump' from '1984', Eddie played the synth solo — he actually made the choice to play the synth solo, not the guitar solo — and the people were actually booing. That's how sensitive keyboards were in hard rock back in the days. And they totally changed that. Now it's really hard to imagine hard rock bands of that style without keyboards… I would go as far as to say that without 'Jump', there wouldn't have been [EUROPE's smash hit] 'The Final Countdown' — I don't think so. I mean, people didn't experiment with keyboards that way. Actually, when people used keyboards, they used to hide the keyboard player behind a blanket on stage sometimes. It was crazy. It was like if you were using keyboards, you had to be ashamed of it in in some way. But he totally changed that."

Earlier this year, Sammy Hagar shot down the widespread belief that he was responsible for the increased reliance on keyboards during his time with VAN HALEN.

Even though Hagar's years with VAN HALEN were the band's most successful in terms of chart success, MTV exposure and Grammy Awards, the group's music became a little more commercial while still maintaining that classic VAN HALEN sound thanks to Eddie Van Halen's guitar work and the blazing Michael Anthony/Alex Van Halen rhythm section.

During an appearance on SiriusXM's "Trunk Nation", Hagar and Anthony both denied that Sammy was to blame for VAN HALEN pursuing a more keyboard-heavy sound that incorporated emerging pop trends at the expense of the rawer, more muscular sound that the band was previously known for.

"Finally I get my soapbox here," Hagar said. "Everyone blamed me for the freakin' keyboard playing on the 'Van Hagar' era, starting with [1986's] '5150'. On [1988's] 'OU812', we went very keyboard-oriented. I didn't do any of that. That's what Eddie did. Eddie wanted to do that. He liked playing keyboards, and he was freakin' good at it. He wrote these beautiful songs like 'When It's Love' and 'Why Can't This Be Love', it's such a cool lick…"

"One Ed really got into the keyboard thing, he [didn't] pick up his guitar for a long time, I remember," Anthony interjected. "He was just playing keyboards all the time."

"I kind of always got blamed for the keyboard songs and it was not me whatsoever. I'm a damn guitar player. Every time I would pick up — like for 'Finish What Ya Started' or something like that — when I would instigate a song, it was a guitar song, 'cause I don't play keyboards. So it wasn't me. I just went along with what we had, and if it wouldn't have been good, I wouldn't have went along with it. I would have said, 'This sucks.' But it didn't.

"The part that's most impressive to me is what a good keyboard player Eddie Van Halen is. He's got a left hand on the freakin' keyboard that's as good as freakin' Bootsy Collins on the bass, man. He's funky with that left hand. Listen to 'When It's Love', man."