"Beast Within", the new video from KATRA — the Finnish gothic metal band named after its charismatric frontwoman Katra Solopuro — can be viewed below. The song is the title track of the group's English-language debut album, which was released on August 29, 2008 via Napalm Records. The CD contains compositions that were originally issued in Finland in the spring of 2007 as KATRA's Finnish-language self-titled debut. The vocals were re-recorded in English with Risto Asikainen (STRATOVARIUS) as producer at Jean Records studio. According to a press release, "Beast Within" "reveals a broad spectrum of gothic metal with folk influences that ranges from catchy hits to sensual ballads accentuated by a very powerful production. KATRA stands for longing, love, and passion set to music, offering a worthy journey to embark."

KATRA made headlines in Finland in January 2007 when the group's song "Tietäjä" — which qualified for the Finnish final in the Eurovision Song Contest — was dismissed by some as a "copy" of WITHIN TEMPTATION's "Jillian". 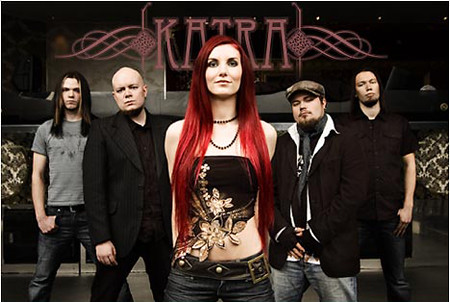