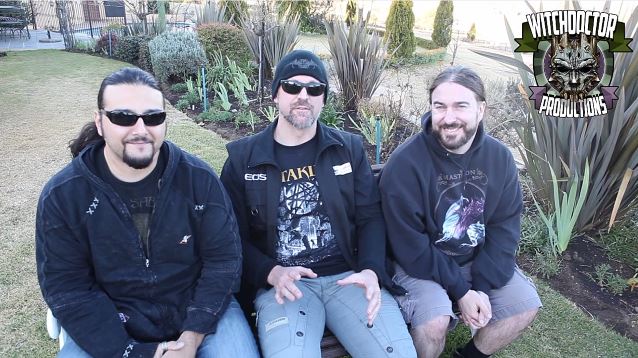 David Devo Oosthuizen of Witchdoctor Productions conducted an interview with Maurizio Iacono (vocals) and Jean-François "JF" Dagenais (guitar) of Montreal, Quebec, Canada-based death metallers KATAKLYSM during the band's recent tour of South Africa. You can now watch the chat below.

KATAKLYSM recently released the music video for its rendition of the SACRED REICH classic "The American Way". The clip was shot by director Tommy Jones (TESTAMENT, DEATH ANGEL, EX DEO) during the band's North American tour with Belgian gore-grinders ABORTED.

"KATAKLYSM has never covered any band before on disc in its 20-year existence," stated Iacono. "We decided to change that on the new record and wanted to do something people didn't expect, but also something that stood through time.

"I personally grew up on early thrash metal and SACRED REICH was and is one of my all-time favorite bands. It was very important that we had the blessings from the band to do this video. The guys in SACRED REICH gave us the green light and are happy that we did this.

"We chose to reconstruct the same type of video they did for it back in the day but in a modern-day setting.”