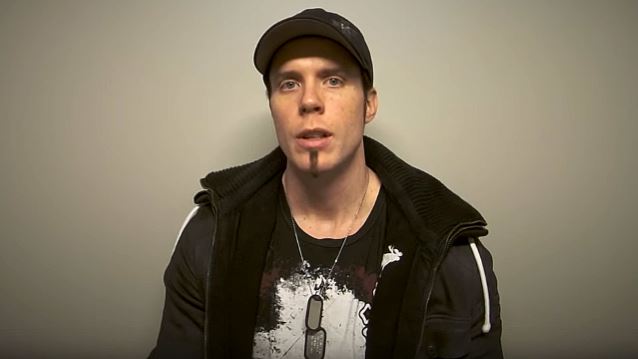 HeadBangers LifeStyle conducted an interview with KAMELOT singer Tommy Karevik on October 16 at 013 in Tilburg, The Netherlands. You can now watch the chat below. A couple of excerpts follow (transcribed by BLABBERMOUTH.NET).

On what he thinks he brought to KAMELOT:

"Maybe a little more positive vibe. The music itself is really gripping and moody and dark and everything, but everything doesn't to be that. I mean, you can still have a positive energy on stage and positive crowd…. Feed off the crowd, and the crowd gets energy from us. For me, that's a super-important thing — the interaction between the band and the people in the crowd."

On whether it was always his dreamto join a successful band like KAMELOT:

"No, it was never a dream. I mean, it just happened… kind of happened to me, and in restrospect, I'm super happy that it did, because it opened up a lot of new things, possibilities for me to play for many people, sing for many people, reach out to more hearts, so to speak. I'd been doing this for ten years — more than ten years — already in another band called SEVENTH WONDER. And, I mean, [we had] smaller crowds [than KAMELOT], but still the same kind of thing. When Thomas [Youngblood, KAMELOT guitarist/mainman] asked me to join the band, I was, like… It's a big thing; you have to think about it a lot. But then as soon as I realized what it was gonna mean and I started listening to all the songs from the band, I was, like, 'Woah, this is really cool.' I wouldn't have joined a band that I don't like, songs that I don't like to sing, with guys that I don't like. So everything kind of came together really cool."

On how he balances his two careers: as the singer in KAMELOT and as a firefighter back home in Stockholm, Sweden:

"It works pretty good, actually, for me. And it's probably necessary for me to not be stuck in one world, because the music world is really special and it's very… it can really drain you, if you're a creative person. So for me to just go back to what I know since many years and do that kind of automatically, for me, it really helps — to be able to build that inspiration up again during those periods of working [as a firefighter]."